Veteran of WWII and the 1944 landing on Normandy's Utah Beach--historical details thus--Dee Virgil Fondy played 8 major league seasons, mostly for the Chicago Cubs. He could hit and run, but didn't take enough walks to be a real on-base threat. Thanks to Answers.com, we know Dee was the 438th-best fielding first baseman of all time, which is probably damning with faint praise. 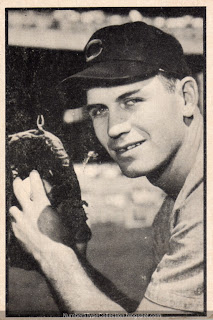 Card front
Bowman printed two cards sets in 1953, one with color photo fronts (160 cards) and this back-and-white follow-up (64 cards). Popular wisdom holds that full-color proved so expensive to print, they couldn't afford to run all 224 players. 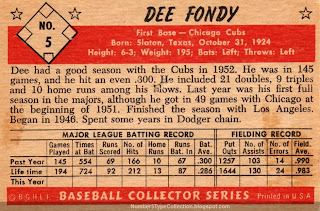 Card back
1953 Bowmans have a unique "This Year" stats column, which some young collectors filled in after the season. Adding a stat grid was one of 1952 Topps' biggest contributions and their competitors noticed it enough to immediately adopt the practice.

Fakes / reprints: Not many B&W reprints out there, since demand is higher for the color series.

UPDATE: Just for Chris, here's a 1953 Bowman with a filled-in stat line! 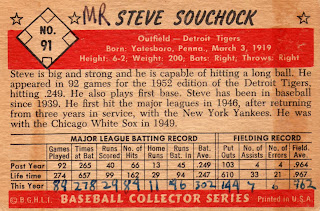 I still have yet to see a 1953 Bowman card where the blank stat line has been filled in. Seemed like a neat idea back when there wasn't an internet or even a Baseball Encyclopedia to get those sort of stats in no time at all...

Ah, interesting. I picked up a big box of 53s at the 2008 National and many of them included filled in stat lines. The collector even filled in multiples of the same player! (I've added a back scan to the entry.)