Today's trio of sluggers managed a rare "Era of the Pitcher" feat, hit 30+ homers in a season. Only 7 such gents did so in 1968, including 4 National Leaguers. (Hank Aaron didn't figure among them, as he hit 29.) 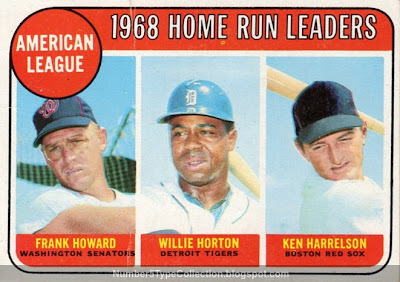 Card front
It bugs me that Harrelson gets no Boston cap love on this card. He's the league's #3 slugger, spent all year with the Red Sox, and Topps couldn't be bothered to get something better that an airbrushed shot from his days with KC or Washington? THE HAWK DISAPPROVES. 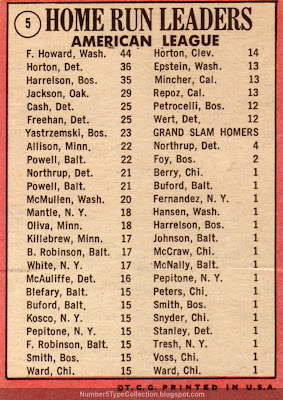 Card back
I do like that they highlighted 1968's grand slams. Jim Northrup's 4 is quite an achievement in any year and Joe Foy hit 2 out of only 10 total homers! (Note that Mantle only hit 18 round-trippers in 1968, his final year, but still walked more than 100 times.)

Value: You can probably find this card for $1 in low-to-mid grade. Leader cards with Hall-of-Famers run up to $10.

Fakes / reprints: Haven't seen any reprints of this card specifically, though Topps used this set design for a bunch of vintage-style cards in the modern era.
Posted by Matthew Glidden