Goudey honored Babe Ruth with four different cards in this set and several other players got two each. The whole thing's a cavalcade of Hall-of-Famers and legendary stars, from Lou Gehrig to the Waner brothers. 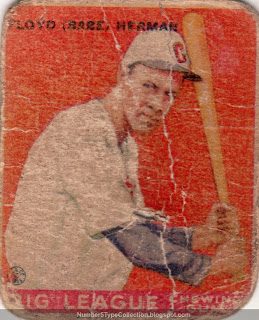 Card front
No doubt about it, my #5's seen better days. Here's the same card in much better shape, courtesy of The Virtual Card Collection. (It also has the full set.) Babe looks about 10 pounds lighter without all the creasing and corner wear.

Herman's "C" cap reflects his move to the Cubs, following several years in Brooklyn and one in Cincinnati. His powerful stick and quick feet led to a ton of triples, averaging more than 10 per year from 1926 to 1933, with a league-leading 19 in 1932. (Check my 1933 World Wide Gum #5 for his infamous "triple that wasn't.") 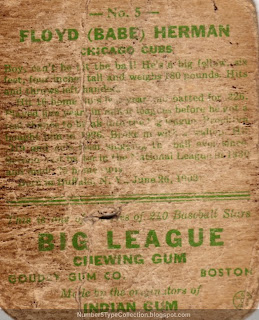 Card back
Nope, I can't read that back text, either. Here's what his bio says.

Hit 16 home runs last year and batted for .326. Played five years in the minor leagues before he got a real chance to break into the big league. Brooklyn bought him in 1926. Broke in with a wallop. Hit .319 and has been slugging the ball ever since. Second best batter in the National League in 1930 and made 35 home runs.

Fake / reprints: There are lots of full-set reprints and faked Goudeys in the market. The "official" reprints have thinner card stock and say "reprint" on the back. (Watch out for cards missing paper near the "GOUDEY GUM CO." text, as someone could've scratched it off in an effort to deceive.)
Posted by Matthew Glidden