This photo's a nice fielding shot of Luzerne Atwell Blue. An excellent ballplayer with both glove and stick, Lu served briefly in the Army during WWI and his body rests in Arlington National Cemetery. (Might this start a run of veterans to Memorial Day, 2010?) 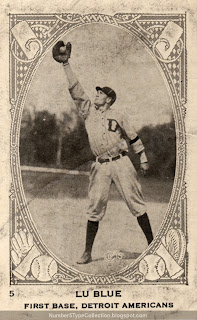 Card front
Check those uniform details: even high socks can't save you from long sleeves and thick, woolen fabric. Imagine donning that for 9 innings on a summer's day! No doubt about it, today's players vastly prefer playing night games in the dog days of August, synthetic fibers or no synthetic fibers.
The ornate borders surrounding each player include a lot of baseball elements, with bat, ball, and gloves. Several candy makers shared this basic design for 1922, in both Canadian (Neilson's) and American (E120, W573) sets.

1922 W573 strip cards (from CenturyOldCards.com)
W573s still show up in 10-card strips, so apparently collectors could buy them from vending machines. Neilson's and E120s, on the other hand, cut their cards individually and probably packaged them with chocolate bars or other candies.
Neilson's printed two series in 1922, one numbered and another unnumbered. (Mr. Blue obviously comes from the former.) Both sets used the same 120-player checklist, but the "numbers" have much thinner card stock, about the feel of 3 sheets of notepaper. 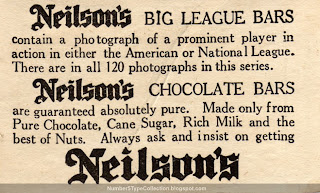 Card back
Unfortunately, no player info or bios in this set. Just absolutely pure chocolate bars. Want more chocolate cards? Check out Poor Old Baseball Cards post of this set's Wally Pipp.
Value: OldCardboard estimates VG "commons" at $22. My Lu Blue cost $26 on eBay, so it's in the same ballpark.
Fakes / reprints: Being a black-and-white issue, it's pretty easy to reprint this set. Look out for faked Hall-of-Famers, especially Babe Ruth. Remember to check the paper stock, with numbered cards being really thin and unnumbered slightly thinner than typical Topps cards.
Posted by Matthew Glidden