Best known for enduring achievements like a 56-game hitting streak and 9 championships in only 13 seasons as a Yankee, Joe DiMaggio later spent 2 years as a VP and coach for the relocated Athletics. Tired facial expression aside, seeing the Clipper in green-and-gold (okay, B&W) just looks...wrong. 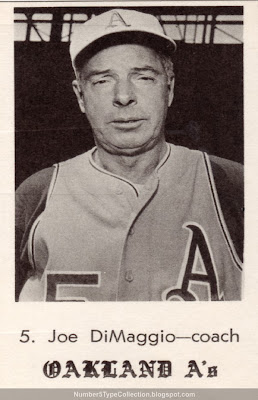 Card front (blank back)
This simple 21-card set came out a year after the A's move to Oakland. I assume it's numbered by uniform, with #5 visible on Joe's jersey. (The Yankees also retired it in his honor.)

DiMaggio spent 3 bittersweet years in the US Army during WWII, achieving a rank of staff sergeant but never coming close to actual combat. I can't say enough good things about Gary Bedingfield's site Baseball in Wartime and his profile of Joe includes a ton of great photos and info.


Value: This is a pretty obscure issue, but individual cards aren't particularly expensive. This DiMaggio cost around $20 on eBay, by far his cheapest card from an in-uniform year. (Reggie Jackson also has a rookie card in this set, which almost certainly costs more.)

Fakes / reprints: This is an easy set to reproduce, being black-and-white and on common card stock. It's unfortunately not an easy issue to authenticate--other than by its innate obscurity--so buy only from reputable dealers. (My eBay purchase included some provenance-checking.)
Posted by Matthew Glidden

Nice card. He does look a bit tired, though.

I wasn't aware of that set at all. Thanks for sharing.

Just another reason I keep returning.

I have never seen DiMaggio in anything other than a Yankee uniform or a suit.

This is rather amusing.

It's an answer to the previous year's musical question: "Where have you gone, Joe DiMaggio?"

Thanks. The SCD big book says a little more about the set. Boston photographer Mike Anderson printed this set and he did a follow-up in 1970, but DiMaggio left the team after 1969, so no more shots of the Oakland Clipper.