Fourth round from the 2011 National in Chicago

Yesterday, I said that National show dealers divide along the modern and vintage line, with relatively little overlap; new stuff looks white and shiny, older stuff looks grey. Booths that sell those old cards and memorabilia further subdivide into the walled castle (look but don't touch), general store (c'mon in and look around), and rec room (wow, what a mess), with communication styles to match. Most of today's scans came from the last group, a bunch of messy tables I sifted through with good success. 99.9% of their low-grade boxes will be junk, but that just makes the hits feel twice as good.


Just about everyone knows the Dodgers moved to L.A. from Brooklyn. Their shortened version of "trolley dodger" was just one of several early team nicknames, though; Superbas also showed up regularly and that's what they're called on this 1909 T205 card, which came in pouches of Polar Bear, a brand of loose tobacco. (Scans of all 208 players at the Virtual Card Collection.)


Topps added a 25-card "Venezuelan" insert set with Spanish text to their 2011 Lineage product. (Checklist at Baseballcardpedia.) They're based on 1960s cards like this Jose Cardenal, when Caracas-based publishers reprinted several sets for South American fans. Most local collectors glued their baseball treasures into albums like this one, which pulled away paper on later removal. 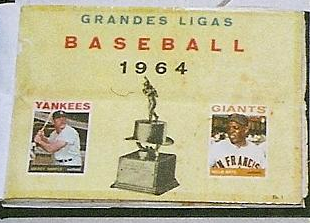 Card stock's pretty close to our American version, but backs look darker and those printed by C. A. Litoven include this HECHO EN VENEZUELA tag line.

I don't expect to complete a vintage Venezuelan set without hitting the lottery, but will always pay 50 cents for a single.


Check out those guns! Hodges knocked plenty of baseballs out of Ebbets Field onto Flatbush Avenue and now we know why. (See fellow Dodgers Campanella and Furillo at the 1977 TCMA/Galasso set profile.)


These purple-tinted 4" x 6" Exhibits come on thick, postcard-sized stock and cover both sport and non-sport celebrities. Hank Sauer wasn't the prettiest ballplayer, but slugged 288 career homers and won the 1952 NL MVP with Chicago, which is probably when this card came out.


Being a Seattle semi-native, I pick up oddball cards of former Seahawk quarterbacks. Jim Zorn couldn't win many games as Redskins head coach, but did plenty under center for my favorite team in their expansion era.


Spike Owen's my favorite player from Seattle's other 1970s expansion team and this came to me courtesy of a trading partner. (I've used "Spike" as a collector nickname and he's the reason why.)


Cool oddball card of the Iron Horse for half a dollar? Yes, please! The set itself celebrates player milestones like 300 wins, .400 average, and 500 homers. I like the choice by artist and publisher Bob Laughlin to include Lou's World Series dingers and help Lou crest the 500 milestone. (Set profile of #5, Christy Mathewson.)

This week's scans covered my favorite pick-ups of the 2011 National in Chicago, with one or two more set aside for tomorrow's vintage giveaway. Start thinking about your favorite team's best sluggers now!
Posted by Matthew Glidden

That Hodges card brings back some memories, too. Great stuff.

Cool Dodger cards! I didn't know Shakey's Pizza made cards. They must be hiding from me.