I remember the San Diego Padres mostly for their 1984 World Series run, as an otherwise moribund franchise blew away the rest of the western division by 12 games. Tony Gwynn and Kevin McReynolds keyed a lineup that, though successful, seems like smoke and mirrors today, with only one great hitter, a handful of decent ones, and no starting pitcher with more than 15 wins (1984 team stats at B-R). My 12 year-old self rooted for Steve Garvey (and thus, the Padres) that post-season and took quite an emotional hit when they lost the series to Detroit. How could someone as American as Garvey lose a World Series? It was simply unfair. 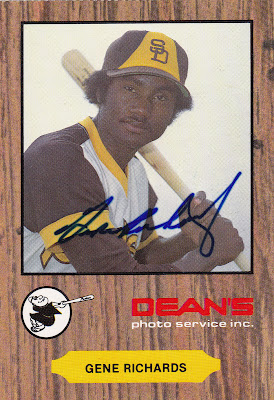 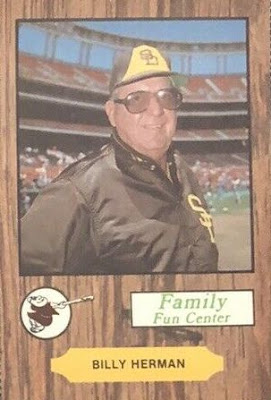 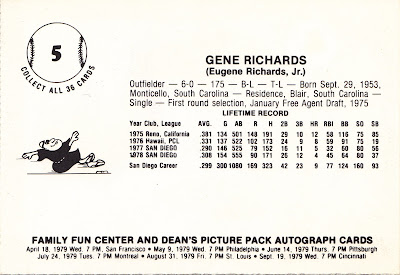 The 1978 team honored by this set produced San Diego's only winning season prior to 1984 and #5 caught Gene Richards at the start of his peak as a high-average, high-speed player with the glove to play any outfield position. His playing time dropped off soon after age 28, right when most guys play best, so I suspect injuries shortened what could've been a great career.

Value: Found this autographed #5 at the 2011 National in Chicago for $4. HOF players would cost two or three times more.

Fakes / reprints: Haven't seen any in the marketplace.

I collect these card signed. Anyone have a 1979 Family Fun Centers card signed by Billy Herman, Jerry Turner or Eric Rasmussen for sale. I still need those to complete my set. Also looking for the KGB chicken card from this set (signed or not signed) please email me at ledsters@msn.com