Jefferson Burdick has a Posse

At this year's National Sports Collectors Show in Chicago, I met Chris Harris of StaleGum, who passed along five copies of his Jefferson Burdick has a Posse sticker, a great take on Shepard Fairey's street art featuring Andre the Giant.

Jefferson Burdick is the best-known early card collector and his American Card Catalog set a base for most of our hobby's organization and practices, such as set numbering, checklisting, and pricing. Tristar immortalized him appropriately (with a modified image) in their 2010 Obak set.


Fellow blogger Cardboard Junkie tweaked his own Shepard Fairey-inspired take on Burdick for the post (and image) COLLECT. 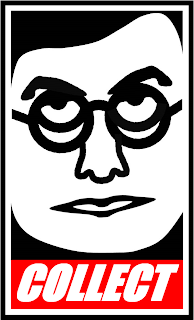 I gave a couple of StaleGum's stickers to vintage collector and writer George Vrechek, who researched Burdick extensively and could talk for hours about the American Card Catalog, Jefferson's collection, and other early contemporaries in the hobby. Here's the six minute version, recorded Saturday evening at the OldBaseball.com dinner. (Background noise from our hotel function room.)


Check out George's articles for much more, including a visit to Jefferson's original collection at the New York Metropolitan Museum of Art.

Thanks to Chris for the Posse sticker, George for talking through Jefferson's history, and Junkie for COLLECT! I enjoyed assembling all of these pieces for other collectors and Burdick fans to find.
Posted by Matthew Glidden