You'd never mistake today's card for an active big league player, short of jokes about ageless guys like Minnie Minoso, Julio Franco, or Jamie Moyer. While Grover Cleveland Alexander was no fresh-faced youngster when he retired at age 43, I'm pretty sure Fleer pulled this photo from an Old-Timers Game in the 1930s or 1940s. (He played in several of them, including this 1939 game at Fenway Park.) 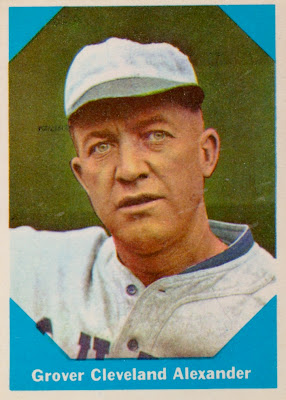 Fleer's first 3 baseball sets seem more like retrospectives, since they feature either one guy, as with 1959 Ted Williams, or long-retired former stars, as with 1960 and 1961. The latter sets picked up a reputation for poor sales and candy counter appeal, since most kids would know only a few of the players pictured. (PSA's set profile goes into more detail of today's 79-player issue.) 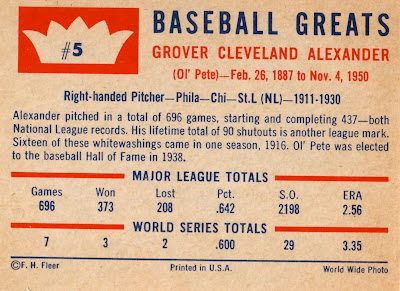 Grover Cleveland Alexander went by an assortment of nicknames both then and now, including Alec (from his surname), Ol' Pete, and Dode. Wikipedia's murky on the origins of "Ol' Pete," but confirmed his full name came from 19th century US president Grover Cleveland. Whatever you call him, Alexander ranks as one of the finest pitchers in MLB history.

Value: Bought this #5 at a show for $3. The set features plenty of stars, but few collectors find them appealing enough to drive prices up.