Back in the 1950s, Fleer gum badly wanted to break into Topps' baseball card market, but were stymied by their exclusive contracts with almost every active MLB player. Fleer finally got a foot in the door by signing Ted Williams and issuing an 80-card set dedicated to his career (#5 set profile), but other big leaguers remained elusive. 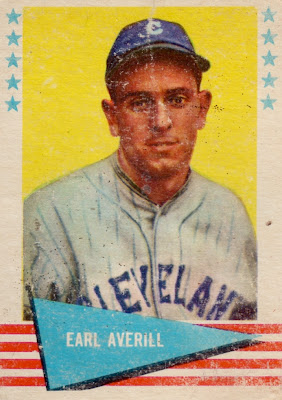 While Fleer tried to build a roster of active players behind-the-scenes--an effort that would ultimately lead to 1963's set--they published a pair of Baseball Greats sets in 1960 and 1961. The latter, this 154-card retrospective, features an America-themed design and colorized black-and-white photos of HOFers and other retired greats.

Like Joe DiMaggio and many other West Coast natives, Earl Averill started his pro career in the PCL, well before expansion brought baseball to California. As mentioned in my 1949 Yakyu Shonen #5 profile, those teams played nearly 200 games per season, and even hosted exhibitions against MLB teams or toured for additional money. That didn't leave much time for off days and vacations! 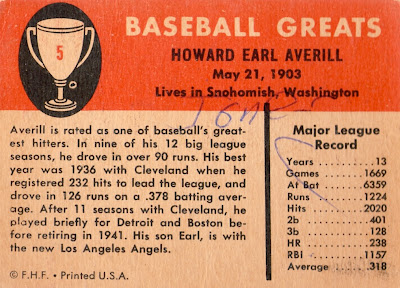 The son mentioned on Earl's card back is Earl Jr., who played catcher and outfielder for five teams over seven years. As luck would have it, 1961 marked Earl, Jr's best season by far. He slugged 21 homers for the expansion LA Angels--nearly half his career total of 44--and set career highs in pretty much every category.

Based on the uniform pinstripes, I assume this Topps picture came from the two months Earl spent as backup catcher for the 1960 White Sox. Coincidentally, that was also the first time a team added its player names to their uniforms, a practice almost every team soon adopted. Check out ESPN Page2's history of South Sider uniforms for more details.

Value: Low-grade singles from this set cost as little as a few dollars. (The biggest stars, like Ruth and Cobb, will cost several times that.)

1961 fleer are great cards. I just recently sold a VSA 5 Gehrig graded by Verisleeve through ebay.

In the upcoming weeks I'll have the rest of the set listed - all VSA graded.

Agreed, I really like this set...much better than '60 and it does a great job of printing cards of some middle-tier stars who otherwise would not have appeared on cardboard