Some sets look so innocuous, you assume there's little to say about them. I started down that road with this simple, 3-color card featuring a Goofus and Gallant-style infield tip on the front, but should've known to expect more. Much more.


Kellogg's set scope is what makes this card just a tip of the iceberg. They first cross-marketed cereal with baseball and other sports in the 1930s, soon after Wheaties achieved success by adding player endorsements. (Read more about that at "Wheaties and Sport" at PopHistoryDig.com.) Two brands, Pep and All-Wheat, used sports issues as in-box promos, and although the latter existed for less than a decade, it no doubt pleased kids by creating three of these 150-card sets to collect and trade. 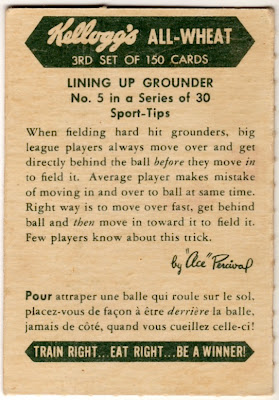 No year appears on the card, but All-Wheat published their first set of 150 cards in 1945, second in 1946, and today's version in 1947. They cover a bunch of different subjects, sport and non-sport, so the baseball subset's only 20% of its total release. (As implied by the English/French backs, Kellogg's marketed this cereal in Canada.)

It's hard to place in perspective now that baseball didn't establish itself as the predominant collectable card until Bowman and Topps kicked off larger-scale production and competition a few years later. Instead of featuring specific star players, sports tips, animals, military uniforms, combat vehicles, and fish all make an appearance.


This Duryea Gas Buggy (another #5) comes from a Historical Autos subset. See the MrBreakfast.com profile of All-Wheat for a complete set scan.


Kinda sad that of the 15 cards in this Strange Animal subset, only three feature dinos, and the brontosaurus doesn't even exist. 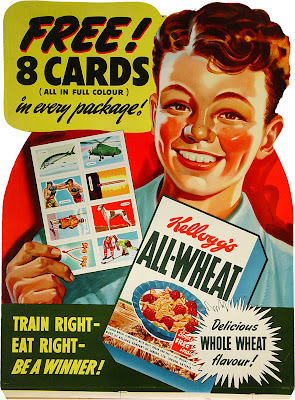 As shown by this store display, cards came as box inserts on 2x4 perforated sheets, with subsets mixed together. (I.e., no "all baseball" sheet.) Being able to just fold and separate cards kept them in much better shape than other food makers who put scissors in the hands of 4 year-olds. *cough* HOSTESS *cough* POST *cough*. 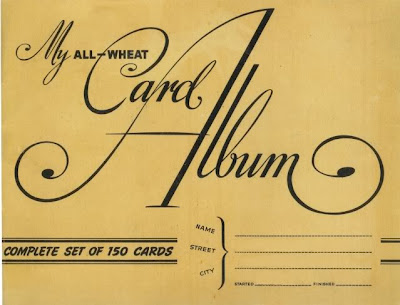 It's not enough to collect cards without an album, right? Not sure how many kids managed to finish theirs, but this is a pretty cool all-around set. Who knew how much would be revealed from that first small card?

Eight cards in a single box of cereal? Maybe Kelloggs should do some retro promotions.

These are sweet... thanks for sharing. I hope I can acquire either a sports or military card from this set.

The military cards are interesting! Found a few listed on eBay UK, but there must be others closer to home.