Today's profile marked the third year Topps licensed their set for printing in Venezuela, one of the world's few countries to follow baseball more fervently than soccer. (America being another.) This practice continued irregularly through the 60s, as baseball sets skipped over 1961, 1963, and 1965. 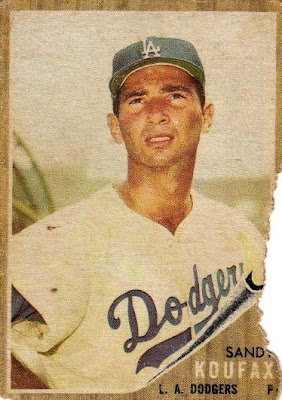 Four characteristics distinguish the 1962 Venezuelan set from the Topps American version.
Almost all Venezuelan baseball cards, even the popular stars, prove a challenge to track down and take deep pockets to acquire. When Robert Edward Auctions offered a low-grade set in 2008, bidding closed at over $7000. 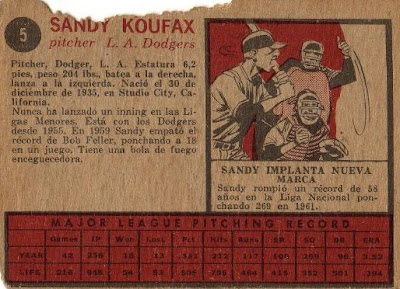 The league leader cards (#51-60) don't use Spanish on the back, so look almost identical to "normal" cards, except for missing gloss and back coloring. Check the backs for darker red ink and no gloss if you own any--they could be the much rarer Venezuelan version. (I've found them mixed into singles boxes at shows more than once.) 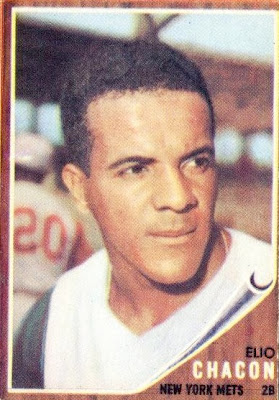 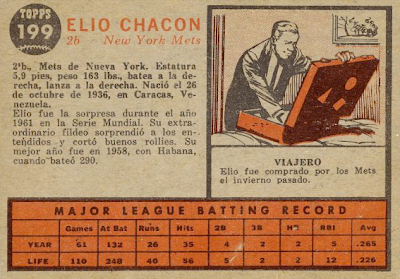 The cartoon text translates as "TRAVELER: Elio was purchased by the Mets last winter."

Fakes / reprints: Haven't seen any Venezuelan fakes, but people sometimes mistake them for American versions. Look for the Spanish text and pinker back coloring.
Posted by Matthew Glidden