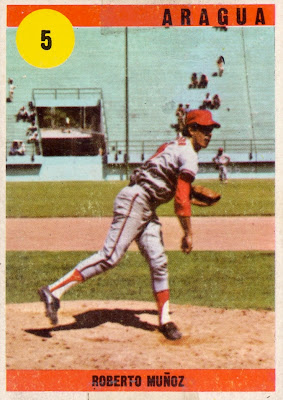 
Some MLB players signed winter league contracts to keep their skills sharp or earn extra money during "off-season," so also appear in the set wearing Venezuelan uniforms. Many cards show glue residue from being mounted in an album, so "high grade" typically means EX condition for this and other Venezuelan sets. 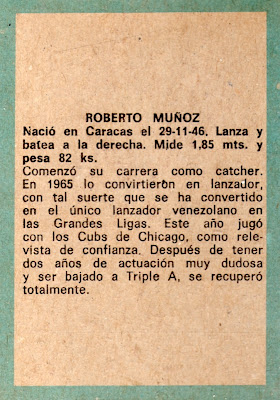 Thanks to blog reader Nathan for a translation of Roberto's bio!


He began his career as a catcher. In 1965 he successfully converted to pitcher, and is the only Venezuelan pitcher in the major leagues. This year he played for the Chicago Cubs, as a reliever. He's recovered completely from two years of spotty performance, including a demotion to Triple A.


Interesting that this card shows his birth year as 1946, but Wikipedia and Baseball-Reference say 1941. Latin players who make a splash in the big league often face scrutiny about their age, if they come from a country that tracks birth dates less rigorously. MLB teams have a financial incentive to know "real" ages, since 25 year-old players are entering their prime, but 30 year-olds are about to leave it. 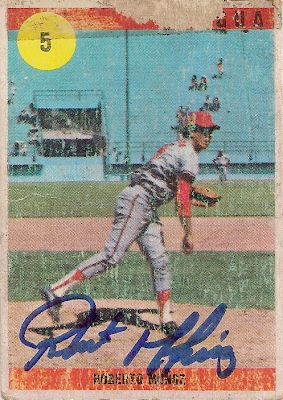 Value: Bought my #5 for $6 on eBay. Stars like Dave Concepcion and Luis Aparicio attract interest from both North and South American collectors, so can go for $100+ in decent shape.

I love these cards,,,just bought 115 different from 1967 series...how many do you have?
Paul Dervis, also of Cambridge MA