Chicago hosted the first major league All-Star game at Comiskey Park on July 6, 1933, and it's easy to see that year as a capstone for baseball's "classic" era. 11 future HOFers started the contest, a still-strong Babe Ruth hit its first home run, and Connie Mack managed AL's squad to a 4-2 victory over John McGraw, to name just three highlights. (With a personal time machine, that's the first All-Star game I'd attend.) 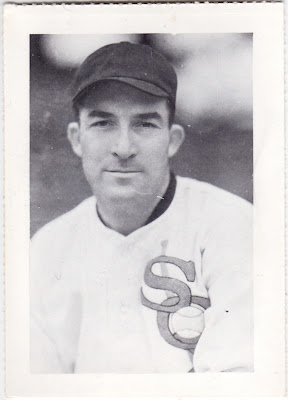 Given that first All-Star game's significance, I'm surprised it took someone until 1977 to create a board game based on its lineups. This Gamecraft package included all 36 players selected on four perforated pages, omitting only managers Mack and McGraw. Card backs supply a brief bio and include several codes that relate to in-game play. (Haven't seen a board or instructions, so not sure how the mechanics worked.) 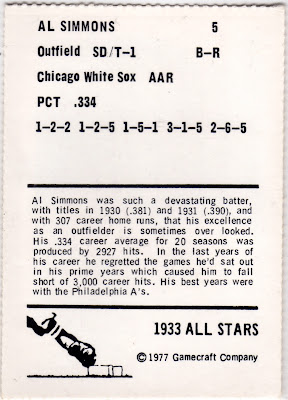 Not many cards refer to players regretting their time off, even for number milestones like 3000 hits. Coming up "short" at 2927 hits didn't stop Simmons from reaching the HOF, as the writers selected him in 1953, three years prior to his death at age 54.

Value: Singles of non-superstars cost a few dollars, with guys like Ruth and Gehrig running $20 or more in good shape.