This would be a disturbing sort of TV show to catch in the 1950s. "Jim Robertson Mimes Sports of the World." The old Athletics uniform hangs loosely on his veteran shoulders, blue cap concealing hair thinning earlier than his 27 years deserves. A producer stands to one side, hands on hips and jowls clamped down on an ego-sized wad of flavorless gum. A baseball sits firmly in the mitt pocket, held in place with sealing tape for the camera's benefit. After two hours in make-up, an art still evolving for color TV, the star looks slack-jawed and distant. Is this the rest of my life? Can't we even afford a catcher's mask? 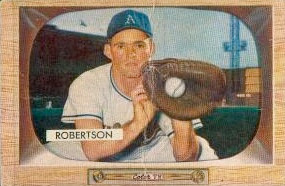 1955 marked Bowman's final year, as they sold out to Topps in early 1956. Its "competitive gimmick" occupied a great deal of the card face and reflected the American fascination with moderne wood-grain televisions. With such an about-face from the uncluttered 1953 and 1954 designs, I'm not crazy about the fronts. Thumbs up for resurrecting color photos, but a hearty "meh" for the TV motif. At least the variety of park backgrounds adds some architectural and historical interest. 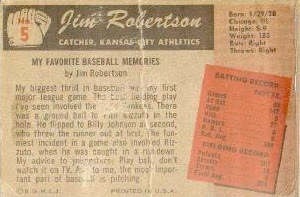 Much more intriguing to me are the card backs. Plenty of them include ghost-written fluff, but Mr. Robertson's shows a great concept, "My Favorite Baseball Memories." As a 13 year-old collector, I often wrote to retired players and wanted to know exactly that kind of thing. What was their favorite memory? Best day on the field? (Kiko Garcia, for example, recalled a good hitting performance for the Orioles in the 1979 World Series.) Even Jim, who played all of 69 career games, gets to tell a couple of stories. He includes Phil Rizzuto in both, as a former Yankee farmhand prior to getting on the field for Kansas City in 1954. Given the design, the most surprising part of this card is the comment near the bottom.

"My advice to youngsters. Play ball, don't watch it on TV."

That's right, children of the 1950s, get the heck off your duff and go start a civil rights movement or something.
Posted by Spike Glidden