Dick Alyward of Seattle's PCL club, the Rainiers, shows us all how to wait out a rain delay and look dapper at the same time. Unfortunately, the front-and-center team logo also makes him look like the beer delivery guy. Dude, kegs go in the back. 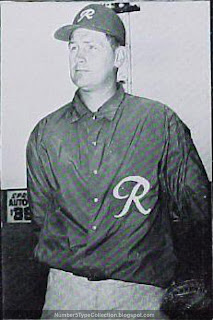 Aylward spent 99% of his career in the minors. He made the big-league Indians briefly in 1953 and went hitless in four games. A catcher throughout, he has the rare distinction of making a first-base putout. Quoth the CPC trivia page:

"As a rookie catcher with the Tulsa Oilers of the Texas League, Aylward retired a runner at first base. It happened April 21, 1947 in Oklahoma City. Pitcher Len Gilmore, batting for the home team, hit a roller past pitcher Tom Warren. Second baseman Jim Shilling and first baseman Jack Richards both charged the ball. Aylward, running toward first base to back up the play, realized the base was uncovered. Sprinting ahead of Gilmore, he got to the base first and caught Richard's toss for the out, scored 3-2."

You think the opposing pitcher took exception at being beaten to the bag by a rookie catcher? We hope Aylward was extra careful on his next trip to the plate.

I picked up this card a couple of years ago and didn't really know what I had. They resemble the Seattle Popcorn issues from the 1950s and 1960s, before the MLB Angels bought the Rainiers from the Red Sox and changed their name to the Seattle Angels. Aylward played for them in 1957 and cards from that year don't turn up often, so this is probably a reprint. Indeed, the card back includes a simple inscription to that end.


"Alyward" misspelling aside, Beckett's collection tools helpfully ID it as "1974 Broder Popcorn," a set of 235 cards that includes luminaries like Maury Wills, Sparky Anderson, and Joe Black. Most likely, it's a compilation of popcorn cards reprinted for collectors who couldn't find the originals. Unfortunately, that makes it another set for player collectors to obsess over, given that it doesn't turn up very often and is hard to identify even when you have it. Ah, the joy of the hunt!