Being one of the all-time greats, Ted Williams turns up on more cards than most. In fact, if you're not familiar with 1959 Fleer, this set's all Splinter, all the time. A vintage set feature one player's unusual enough, but its #5 features something peculiar. 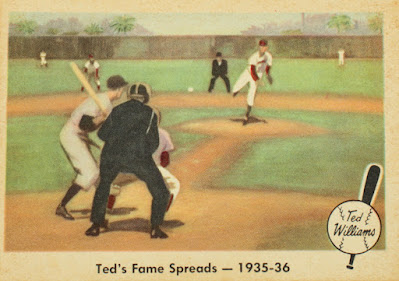 The unusual: For 1959, Fleer signed Williams to an exclusive contract and created an 80-card biographical set based on his life, career, and military service up to that point. #5 "Ted's Fame Spreads" covers his growing renown as a teen-aged ballplayer.
The peculiar: Wait, Ted seems to be batting right-handed. Whaa? Although a natural rightie, Williams hit from the left side, perhaps to get an extra few inches toward first. (The Kid wasn't the fleetest of foot.) So did Fleer reverse a negative, like Topps did on their 1957 Hank Aaron? Was this a flirt with switch-hitting? Not so. Turns out he's pitching in this shot. Though a two-way star for his San Diego high school, Ted had little patience for the finer points of pitching and fielding in the bigs. ("Ah, screw it," he'd famously say, "let's go hit!") 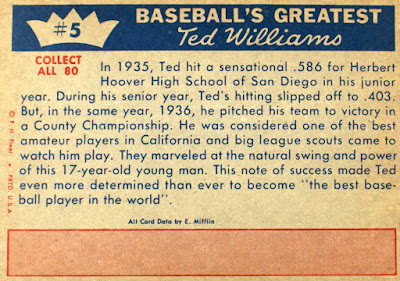 That Ted could carry a set on his own speaks to the heroic status accorded someone who proved his mettle for decades on the field and across two wars in the air. Fortunately for budget-minded folks, '59 Fleers are the cheapest way to get his career-era card. Some collectors like the color-tinted look, though it's measurably inferior to similar Topps sets from the early 1950s. I'd be more interested in the concept now if modernity hadn't eclipsed it with an explosion of flashy mod-retro issues.
Posted by Spike Glidden