Today's #5 turned up at the 2008 National Sports Collectors Convention in Chicago. Also called the "annual" or "big show," each massive summer-time gathering's basically a hangar full of everything sports-related and collectible. 90% of it relates to baseball national pastime, but there are plenty of other sport and non-sport items. The sheer quantity and variety of stuff overwhelms one if you look up. Of course, plenty of any show's big-ticket items involve Yankees--and these guys stand out. 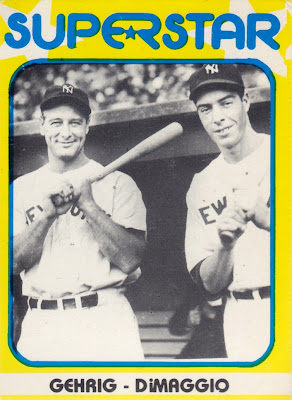 Gehrig and DiMaggio played together from 1936 to 1938, both reaching milestones and titles worthy of legends. As amazing their actual hit production, a sense of hindered potential follows both; Lou died from ALS before reaching 40 and Joe lost prime years 28, 29, and 30 to WWII. Imagine what they'd have done with full careers! 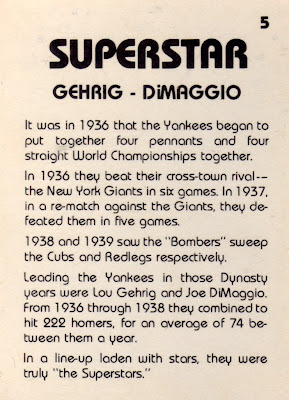 Card backs offer few hints at their publisher or year of issue, but the SCD catalog credits this Superstar set to Card Collectors Closet, a shop in Springfield, MA. Their initial 45-card set came out in 1980 and a similar effort followed in 1982, originally sold complete for $3.50 each.

Value: While laden with all-timers, singles cost just a few dollars due to limited collector awareness and demand. This might be the least-expensive Gehrig / DiMaggio card out there.

Fakes / reprints: I doubt anyone would take the trouble, given their low value.