Talking about classic cards from baseball's golden age should always include 1956 Topps and its 340 cards of high-quality composition. Replete with star power, it's got Jackie, Mantle, Aaron, Mays, Clemente, and today's guest, Ted Williams. Most cards include an in-game action shot and eye-popping colors. Later years found it tough to match the beautiful horizontal layout, which looks even better in oversized 8-count binder pages. 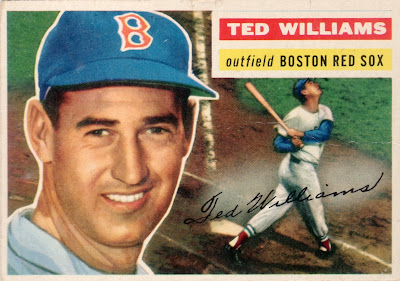 Topps probably designed this set with serious competition in mind, given their fierce rivalry with Bowman over player contracts and the collector dollar. Subtle touches like the portrait halo, card front autograph, and varied color combos no doubt took time to design and vet. Think of the grunt-level surprise when Bowman sold their assets before producing a 1956 set, closing the doors on its run of post-WWII card production. Topps made the permanent move to attractive color photos in 1957, but many argue that card-as-art ended with this set. 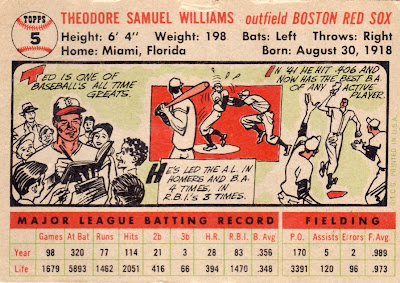 I spotted my first 1956 card, #30 Jackie Robinson, atop a consignment stock of vintage goodies in a Seattle-area shop circa 1998. What excitement! It's a little embarrassing how easily it transported me. My collection contained exactly zero Jackie cards at the time--but here was one from when he played, with a great portrait, and an action shot of him stealing home! Damn, that was a collecting moment to package with gum and a team logo sticker. I eventually picked up a couple dozen high-grade cards at the shop, most of which became part of my only PSA submission. (The highlight was a PSA 8 Eddie Mathews, thanks for asking.)

This Williams belongs in any collection of significant cards, not just a fetish group of #5s. Only in his late career did companies create designs to match the incomparable career arc of twenty seasons and two military tours of duty. My only picked nit with 1956's design is the photo, where Ted's taken with something waaaaaay up in the air. Did they catch him popping up? Is that just a lazy fly to right? For all the good-looking confidence of the portrait photo, I say show the man some respect as a hitter. Even a fake at-bat or great defensive play beats a fluttering shuttlecock destined for the second baseman's mitt.
Posted by Spike Glidden