Joltin' Joe provides a worthy competitor to our recent spate of Ted Williams. Next year, Yankee Stadium might move down the street and reopen for business like an Oriental rug merchant, but DiMaggio's shadow still lingers. I know, Mantle did his own good work in center for which Topps remains eternally grateful. (Oh wait, their gratefulness lasted ten years.) In the public mind, though, the Clipper owned the most important position for the most important team. An All-Star every year he played, the Yankees won titles in 9 of his 13 seasons, and retired his uniform number (surprise surprise, #5) in 1952. Hard to beat that with a fungo bat. 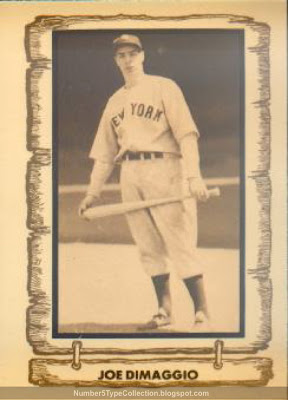 As excellent the player, I have to question the photographer for today's shot. It's got it all, unflattering pants, EW YORK, and painful solar glare. The last point impacts the whole oeuvre of baseball pictures. How many of these turkeys take nothing but "sun directly overhead" pictures? Is it any wonder people look squinty? Or wear sunglasses? Or limit what shows up on cards made decades later? He's even leaning away from the sun like an anti-flower, probably to save his eyes. SMILE! yells the hack. SQUINT! replies Joe.

My cardboard habit kicked off in 1980, but Twin Peaks candy shops only stocked Topps, Fleer, and Donruss. I didn't catch the Cramer Legends until 1982, when we moved a little closer to Seattle. The set was all classic players on an odd, coonskin cap-era shingle design. The old names and faces interested me, but only in passing, like girls to a fourth-grader. What I did know was crappy Mariner shortstops, inside and out. Trade my Mel Ott for your Todd Cruz? That'll give me both sides of the Cruz Connection! You've got a deal, my friend.
Posted by Spike Glidden