Artist Robert G. Laughlin created a number of 1970s baseball sets, from all-time highlights (1974 Famous Feats #5 profile) to Negro League player portraits (1978 Long Ago Black Stars #5 profile). His most readily available, the World Series issues, came in partnership with Fleer, but many others went out under Bob's own name, advertised via his popular newsletter, "Inside Pitch." Laughlin's style, alternately cartoonish and evocative, works well with cards and Mascot is about the cutest thing you'll see on baseball cardboard. 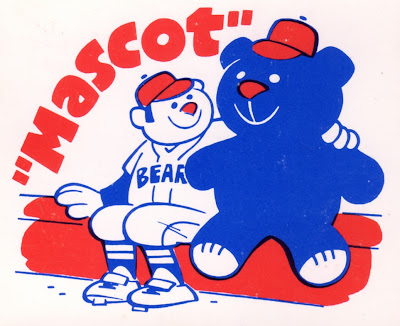 Card front
Prior to their successful challenge to Topps' hegemony and their 1981 set, Fleer wandered somewhat in the baseball card forest. (They printed lots of stickers, lots of team logos, and lots stickers with team logos.) Laughlin's issues seem more like labors of love and 1974 Sportslang comes from this mold, giving history to a bunch of sport phrases. 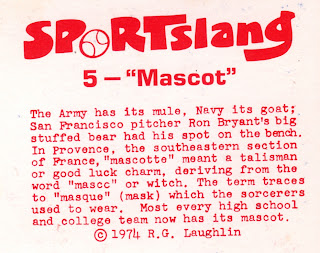 Card back
People who jump into suit and cavort around the field are common to baseball, though not universal. The Yankees, for one, have no mascot and the Red Sox only added "Wally, the Green Monster" a few years ago. In the olde tymes, a "mascot" was more like today's bat boys, with some teams hosting a kid in the dugout for good luck or amusement. They'd wear a Gaedel-sized uniform, pose for team photos, and occasionally appear on a card. The Chicken (FamousChicken.com) modernized wearing furry suits and acting out against umpires, which continues to this day in both his act and dozens of imitators.
Value: Singles from this 40-card set cost a dollar or so, with no real stars to speak of.
Fakes / reprints: Doubt any reprints or fakes exist for this set, given its low profile and lack of real players.
Posted by Spike Glidden