Mean Mr. McQuinn looks really unhappy about something in 1941. The German invasion of Poland? American isolationist policies prior to the attack on Pearl Harbor? Both are possible, but my choice is "being on the St. Louis Browns for the prime years of my career." 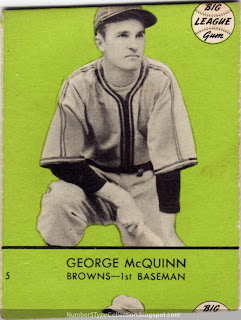 After dominating the hobby with its creative, eye-catching sets a decade earlier, Goudey's blasé 1941 effort tells us more about the company itself than the game of baseball. They printed its austere 33 cards on scrap rag paper due to shortages. Mel Ott and Carl Hubbell are the only superstars and each card in the set is blank-backed, so what you see is what you get. Four fruit colors serve as the set's only "innovation" and create a very challenging master set. (I'm not one for grading companies, but note the #1 PSA set entry isn't even complete, let alone in good condition.)

While no Mel Ott, McQuinn was a decent player. He made 7 All-Star games, placed 6th in the MVP voting for the title-winning 1947 Yankees, and hit the only World Series homer in Browns history. He produced the rare feat of double-digit 2Bs, 3Bs, and HRs in back-to-back years and almost always walked more than he struck out. This maintained his run production despite below-average teammates and George dipped below 100 OPS+ only once in 11 full seasons.

Goudey did me two favors by mis-cutting this #5. First, it's affordable, a magic word in my world. Second, we get some insight into the printing setup, as the top of #19 Posedel appears below McQuinn; compare the hat brim on both. 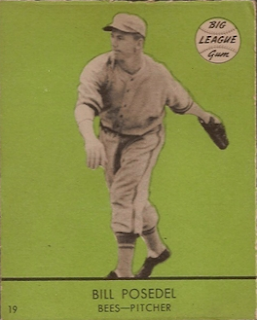 Cutting problems plague the 1941 set, given its "stacked" process. Sheets near the top would cut cleanly, but the bottom would slide out slightly and deliver the final product you see here.

The set's an alluring pre-war target, with only 33 cards and no huge names. However, heed the words of my trading friend (and SCD contributor) George Vrechek.

"Category 4 – Nice cards but impossible, Double Black Diamonds in ski terminology. Forget ‘em. Just not available much even though book prices may not be ridiculous. A type card would be nice though. (emphasis added)"


UPDATE: This 1988 reprint shows what a well-cut card looks like. 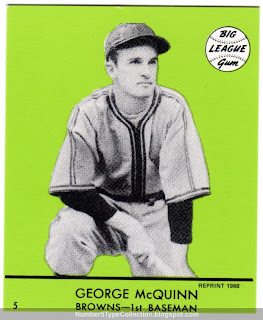 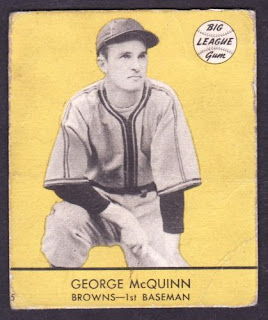 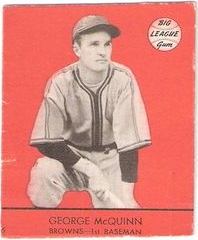 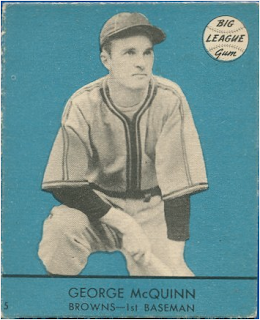