There's a poignancy to this card that impresses me every time I look at it. The green of the field, the smoky blue sky, and the umpire's crisp attention all point to the pastoral nature of baseball and show an artistic reverence for the game itself, something missed in an era of big stadiums and superstar personalities. 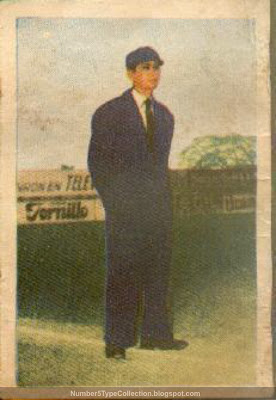 The umpire pictured, Raul "Chino" Atan, is of Chinese extraction. He spent a few years as a player in the Cuban leagues, but is best known for his time behind the mask (or, as depicted by the card, watching the lines). From what I can tell, all books about Cuban baseball include stories about him, a distinction unlikely for umpires of the American game. No wonder he received a card in this excellent 1952-53 Victoria tobacco set, and a beautifully posed one at that.

The foliage swaying just beyond left field doesn't look like a palm and scuttled me off to search for Cuban trees. Maybe it's a banyan fig? Something else tropical and laced with intrigue? (Is there anything as intriguing as "the tropics?") You can imagine kids unable to front the admission fee watching from holes in the outfield fence on a blazing afternoon and wandering back to the tree for shade between innings. All the while, Atan stands erect in his suit-and-tie, confident in baseball's lined dimensions. 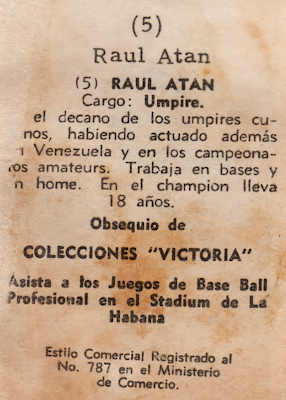