Smith's Clothing, a men's store in the Bay Area, put out two sets of cards in the late 40s to celebrate their local minor league team, the Oakland Oaks. This 1947 card shows off the gritty determination of one Ray Hamrick, a war-time shortstop for the Phillies still hanging on in the PCL. His 452 big league at-bats in 1943 and 1944 produced a winsome .205 batting average with sparse power. Match that with a below-average glove and you've got Pacific Coast League material. I'm sure it was a pleasant train ride to California. 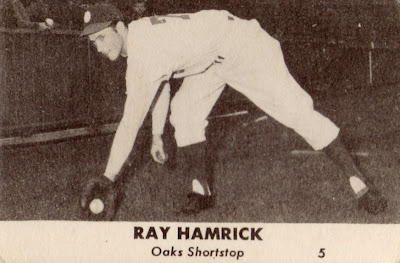 Card front
The card has two interesting features: 1) horizontal composition and 2) Ray's ability to field the ball while eyeballing the stands for scouts willing to give him another shot at the big time. This might explain his mediocre glove work!

I like most side-shot cards, especially those that give you an interesting composition or capture an exciting play. Not sure about Mr. Hamrick, though, trapped in his half-effort reach, ghostly right hand dangling forlornly behind. Perhaps a cheap sideline shot is all a clothing store can afford, but why blow a sideways picture on it? Did they simply never put a bat in the guy's hands? (The Phillies might wish they hadn't.) 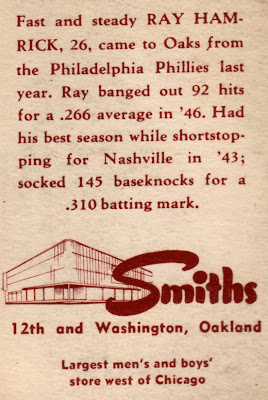 Card back
Clothing stores don't often publish cards and this one makes me wonder whether the cards actually came from the stores or the team just sold Smith's-sponsored goods at the ballpark. Black-and-white printing with a muddy background doesn't wow the eye, but the set does get credit for being one of the first printed post-WWII, still four year prior to Topps' higher-quality debut.

Oakland's PCL team (fan motto: "I'm For the Oaks!") garnered five sets soon after the war, three from the Remar Bread company and two from Smith's. 1948, their final pennant-winning year, stands out in history. That team, nicknamed "Nine Old Men," featured a number of former MLB stars, Billy Martin's first pro campaign, and some manager named Stengel. More about them when I get to the 1948 set's #5.
Posted by Spike Glidden

Matty those are pretty tuff words for a guy who doesn't look like he could rip his way out of a paper bag much less make it in the PCL!

That's true, I tried to be funnier back in 2008 (and couldn't have played any higher than high school ball)! My writing's more straight-laced and analytical these days (circa 2010).