Every now and then, baseball cards return to the floating head, that single design element that's equal parts "spotlight" and "creepy." Topps league leader cards use it off-and-on since their debut in the 1960s.


Chicago Cubs team cards went bodiless for most of the 1970s.


Magazines and newspapers no doubt used close-cropped head shots well before then, but today's #5--actually a folded booklet--predates anything I've seen on regular cards. 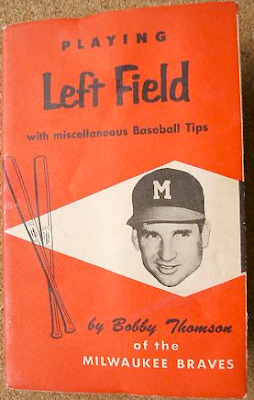 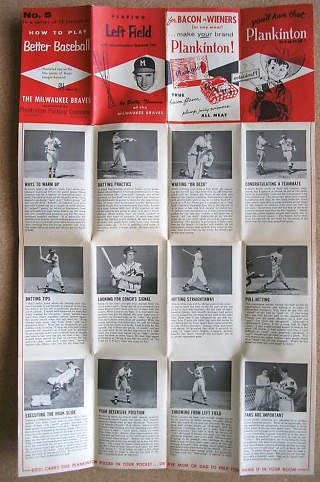 Bobby broke his ankle during spring training in 1954, so gave way to a rookie outfielder named Hank Aaron, who went on to play 122 games and hit his first 13 MLB homers. Aaron shifted to right in 1955, returning Thomson to left, a lineup Milwaukee kept through mid-1957.

Value: I recently came in second on eBay for a mid-grade booklet at $70, so that's a starting point. As of this writing, another eBay seller lists it for $220 Buy-It-Now, so let's call its price "variable."

Fakes / reprints: It'd be tough to fake something that large, but might happen for something so rare. (Warren Spahn and Eddie Mathews are probably the only guys valuable enough to try.)
Posted by Matthew Glidden

I don't understand the "creepy" perception that people get with these cards.

Whimsical? Yup. Fun? Yup. Goofy? Yup. Creepy? No. I don't think that was ever the intent.

Not normally, true. This one got me because it's a meat packing company offering up just the head. :-)