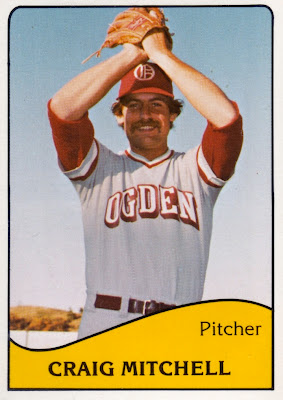 Today's #5 hails from Utah and features an erstwhile Oakland A's affiliate of the same name. But life is more than former baseball teams--interested in a state with good business and natural wonders? According to Forbes in 2010, the Ogden area trails only Pittsburgh as America's most livable city. That rating's a combo of employment levels, crime rate, cost of living, local economic health, and available culture. Judging by Craig's card, I'll add "great weather." Not a cloud in the sky!*

(*Brought to you by the Odgen Chamber of Commerce.) 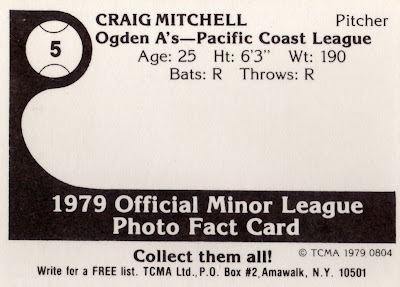 That blank section looks just like a stadium scorecard, perfect for adding Craig's stats by hand. Just assume I penciled in "12-9 for Vancouver in 1978" and then "2-2 for Ogden in 1979." (Full minor league stats at B-R.) The latter marked his final pro season, but I bet he's still a ringer in local softball leagues.