Hey, it's another disc set! After yesterday's post about 1976 Sportstix stickers, round cards are on a roll. On a roll! Because they're round. 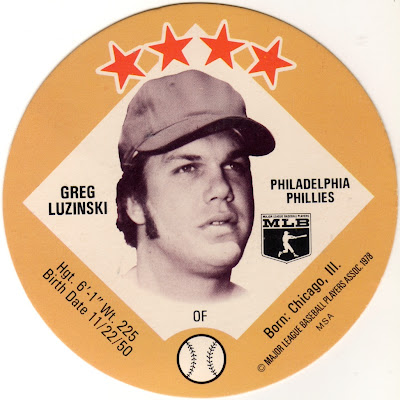 Big T produced this 26-player set on the heels of MSA's popular (but unnumbered) discs from 1977. The 3" diameter allows for a mug shot and basic bio, but used black-and-white photos, probably to save on printing costs. (Greg wears a logo-less hat because Big T only licensed the players themselves through the MLBPA union, not the team insignias via MLB Properties.) 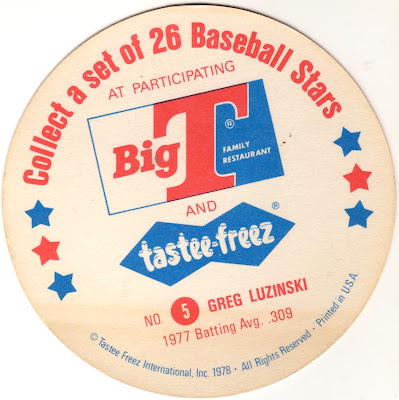 Big T / Tastee-Freeze restaurants serve "classic" American fast food, similar to larger chains like Dairy Queen. Wonder what that light stain on the Luzinski disc (just below the #5) came from, a burger or the milkshake?


Love these old restaurant signs, though this one's for a Big T awaiting demolition. According to Wikipedia, you can still find Tastee-Freez shops scattered across 22 US states.

I had a tastee freez just up the road from my old apartment. I believe that it's the only Tastee-Freez in the whole state of Alaska.

I haven't thought about Tastee-Freez in many, many years. I don't remember the Discs, but I do remember the ice cream.

My first job was at a Tastee-Freez in small town Indiana - straight out of a Johnny Cougar song. I was paid $1 an hour for the first week - a "training wage" I was told. I was supposed to get a raise after that first week but landed another job just in time.

That's a pretty good collection of Tastee-Freez memories! It was all I could do not to riff on the Mellencamp song in today's post. :-)