Fellow collector (and member of OBC) Bob Neill sent me several cards yesterday, all hits to my 1962 Post Canadian baseball set. Like most of the cereal set, these six show close-cropped players and lots of text, matched with French for their francophone audience. 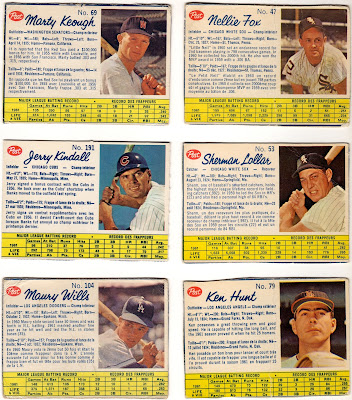 Note that 5 of the players come hand-trimmed from boxes, but #191 Jerry Kindall features edge perforations. Collectors could obtain some cards directly from Post, which came on punch-out sheets and left those tell-tale chads.

Further note that #104 Maury Wills appeared on Post, Fleer, and regional sets well before his "feature card" debut with Topps in 1967, who failed to sign him at the minor-league level and apparently left it unresolved for several years. If you're interested in his earliest cards, more than 20 issues predate his "rookie" card from 1963 Fleer. See Beckett.com's player search for a list and--surprise!--that 1960 Topps #389 actually featured an unnamed Wills in a fielding pose from the World Series. The exact definition of a "rookie card" remains tough to pin down!

See my 1962 Post Canadian #5 profile of Mickey Mantle for more about the set itself.

Thanks for the hits, Bob! If any readers are interested in vintage trading and not already an OBC member (headquartered at OldBaseball.com), check out our site and consider applying for membership. It's a great group for both cards and socializing.
Posted by Matthew Glidden

Email ThisBlogThis!Share to TwitterShare to FacebookShare to Pinterest
Labels: thanks