This is one of the more era-specific baseball giveaways I've seen, especially coming from a minor league team. Matchboxes usually mean cigarettes and cigarettes mean tobacco, which MiLB prohibited across the sport starting in 1993. These days, it's all programs and overpriced food! 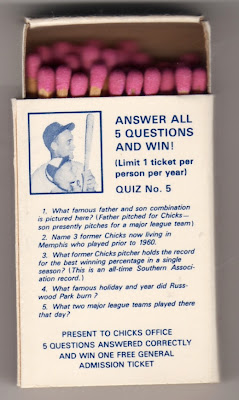 Of the 5 questions on box #5, only 3 turn up easily via Google. The other two are somewhat esoteric--players living in Memphis in the 1970s--or need quality research, since Memphis rosters from the 1940s and 1950s prove tough to come by. (I suspect you could find answers locally back when these promos came out.) Questions below!

Isn't it odd that Memphis, a franchise devastated by their ballpark burning down, would promote themselves with matches? 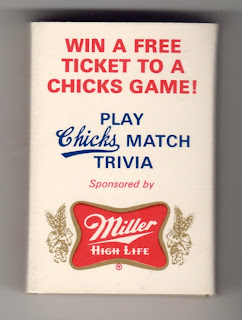 UPDATE: Thanks to reader Ed Watts for researching the first two questions!

Value: Found this for $1 at the 2010 National in Baltimore. Not sure if there's a larger market for matchbooks, beyond better-known sets like the 1935-6 Diamond Match Co.

Fakes / reprints: Doubt someone would ever fake a matchbox.
Posted by Matthew Glidden