The mid-1970s inspired a lot of "no frills" sets that show just player pictures with a white border, often created by fans who collected cards in their youth and now wanted to make some money at it. Mike Aronstein of TCMA and SSPC is a prominent example, but Minnesotan Barry Fritz followed the same path in this look back at 60s and 70s Twins players. He released today's issue in two series, #1-25 in 1977 and #26-50 in 1978, and sold them through team concession stands. 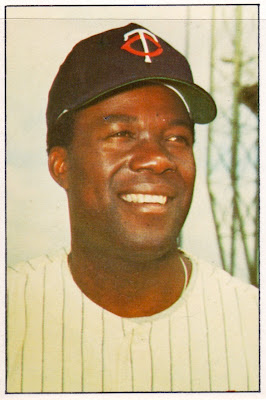 This clean-cut gentleman owns one of baseball's best nicknames, being Jim "Mudcat" Grant. Topps even used it on his 1959 rookie (see it at CheckOutMyCards.com), though reverted to Jim for their 60s and 70s cards. 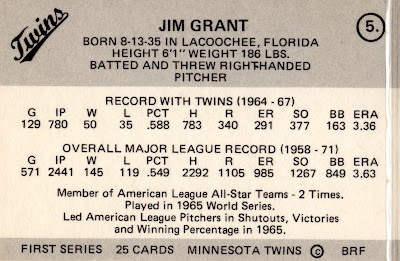 Card backs include career stats and highlights, like Grant's two All-Star appearances and excellent 1965 performance. Not just a great pitcher, he also co-wrote The Black Aces, a profile of African-American 20-game winners.

Trivia bonus: a card-collecting friend recently pointed me to Ken McBride, a former Angel with three All-Star teams (1961 to 1963), but only 40 career wins. Based on my B-R research, here are the "record holders" in AS selections, but low career wins.

Obviously, other starters made 3, 2, and 1 All-Star teams, but those guys ended up with the fewest total wins at each level.

Value: Singles from this set cost a dollar or two and somewhat more for Harmon Killebrew and Tony Oliva.