Lawrence Peter Berra, baseball's own appointed yogi (spiritual sage), said plenty of things that our sport committed to collective memory, enough to get their own term, Yogiisms. Everyone seems to have a favorite quote--mine remains, "I really didn't say everything I said." 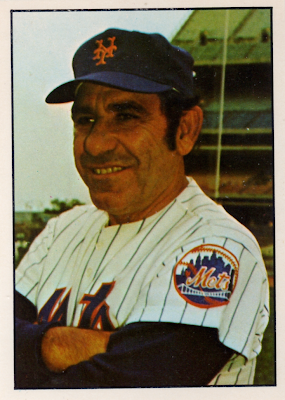 Card front
SSPC, one of Mike Aronstein's two card companies (the other being TCMA), promoted their upcoming 1976 set by printing this 18-card set of "samples" in the winter issue of Collector's Quarterly magazine. Everyone pictured changed teams during 1975, so they probably used it to clear out player photos that'd be "wrong" the following year. Two HOFers appear, Yogi and the peripatetic Gaylord Perry. (New York dropped Berra as manager 109 games into their 1975 season, just two years after he took them to the 1973 World Series.) 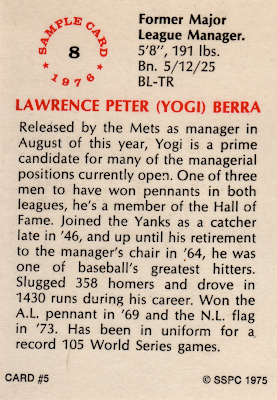 1976 SSPC sample card back
SSPC tweaked the font for their full 1976 set, but otherwise kept the same design elements. 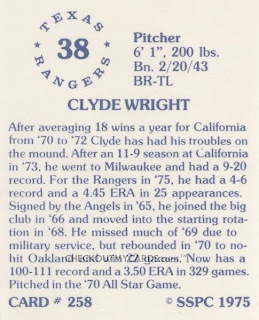 Value: SSPC stars run a few dollars, pretty affordable for 70s HOFers. Not too many cards feature Berra as a Met, so that's another note in its favor.