Hostess printed their baseball sets two different ways for several years: "normal" 3-player panels on snack boxes and "Twinkie" single-player inserts for their infamous sponge cakes. The former came printed on panels you could cut into separate cards and the latter served as a packaging base for plastic-wrapped Twinkies. Collectors know them in part by the large, yellowy oil stains evident on Mr. Morgan's lower half. 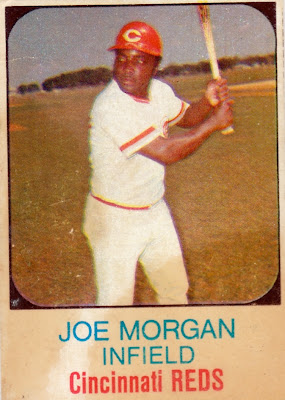 Twinkie panel cards match "normal" Hostess in picture and design, other than black bars just above and below the back's career stats box. While yellow cake stains are a strong hint, collectors usually look for the bars to positively identify a "Twinkie card." 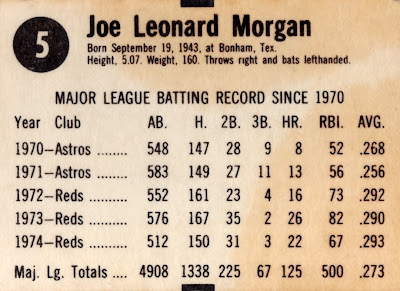 Note that this set's specifically made up of single-card panels and uses the "Twinkie" designation for convenience. Larger snack cake packages, including Twinkies, offered three-card panels on the box itself, but card catalogs call those part of the "normal" Hostess issue. (Again, it comes down to the black bars shown above.)

Like other years, the 1975 Hostess set included 150 players and many survived to the present day, given how many folks love to snack on Hostess cakes. Check out this Net54 Baseball thread for photos of a Twinkie uncut sheet.

Value: Trimmed singles cost a dollar or two and complete panels cost a bit more due to rarity.