In honor of our approaching Valentine's Day 2011, here's a candy-colored rainbow heart. I just wish Mr. Tetsuka looked happier to be pictured on it. 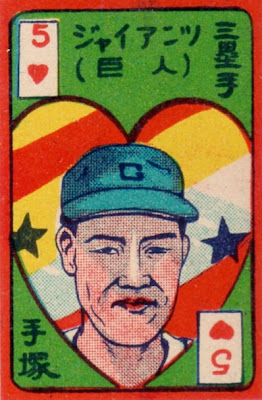 Card front
Whether or not Akiharu let it show, this set coincided with an explosion in Japanese baseball interest and sports as a profession. Spurred by successful international tours of American All-Star teams and their own Yomiuri Tokyo Giants, an 8-team pro league started play in the mid-1930s. As in America, domestic squads continued play throughout World War II--only stopping in 1945 due to Allied bombing of Japan itself--and their league went on to double in size by 1950, the year of this playing card-like set. (Find a more detailed history at Rob Fitts' own site.) 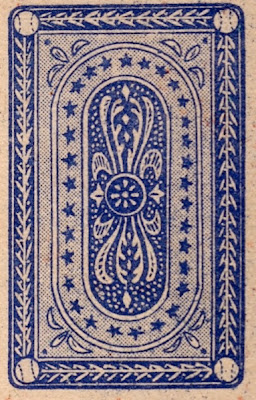 Card back
This Menko set, cataloged JCM21, contains the usual 52 suited cards, but added one joker--the Babe. Ruth helmed the American All-Star team that toured Japan in 1934 and crowds turned out in massive numbers for their 18-game schedule against local players. (Negative English connotations of "joker" might've been lost in translation--this card's clearly a salute to his enduring popularity.)


Some complete set sheets remain in the hobby, though I'm not sure if they're leftovers from original production or people just bought it uncut and separated them into individual cards later.

Fakes / reprints: Haven't seen any in the market, though Ruth might be popular enough to fake.
Posted by Matthew Glidden