Back in 2009, this blog profiled a set called 1937 Thum-Movies, which presented 24-image flip books as quick bursts of baseball action. Pitchers threw a single pitch and hitters took one cut, all in a second or two of flurried paper. It's hard to imagine why Goudey turned its card talents to such an odd set, but remember that theaters attracted plenty of attention (and dollars) during our Great Depression and these booklets echo the motion picture appeal. 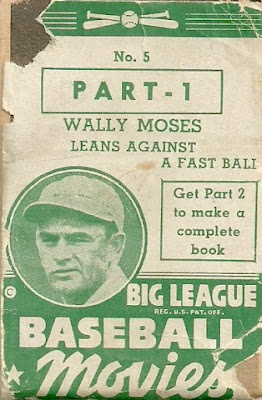 Part 1 booklet front
Goudey didn't work hard to create 1938's version of their baseball booklets. They just split 1937's 1/4"-thick version into two 1/8" halves and added player pictures to the front, hoping folks would buy the same quick shots a second time. They proved popular enough at the time that you can find them on eBay in the 21st century, making the set "obscure" instead of "impossibly rare." 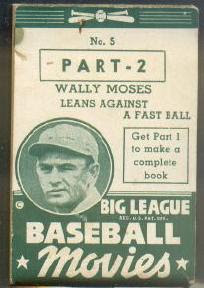 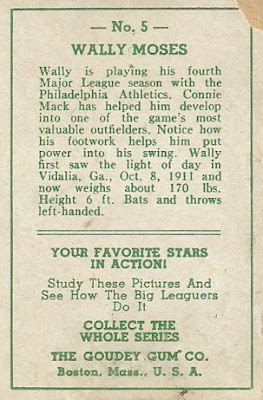 Booklet back (same for both parts)
Goudey's bio called Moses a left-hander, but its shadowy batter swings like a righty. Is this booklet animating the wrong guy, or did Wally switch sides to fool the photographer? (Without better information, I assume it's a printing mixup and actually shows someone else.) 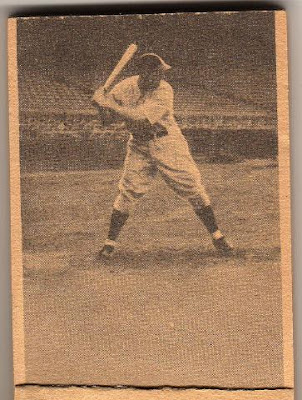 Fakes / reprints: It'd be difficult to reprint an entire flip book, though folks might try it with superstars like DiMaggio.
Posted by Matthew Glidden

The bio is correct. Wally is left-handed. Very cool find!