This Bazooka-style gum comic pictures today's guest as a 70s White Sox player, for whom he made two All-Star appearances, but I remember him as Detroit's speedy center fielder. Their mid-80s core of good-to-great players (Trammel, Whitaker, Gibson, Lemon, Morris, Parrish) blew everyone away with 104 wins in 1984 and cruised to the title. They worked so hard, it looked easy. 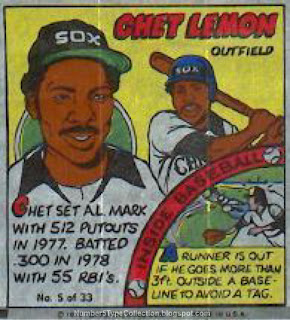 When the 2001 Mariners set a record for wins with 116 in Tiger-like style, I recall playoff pundits asking (1984 Detroit manager) Sparky Anderson if Seattle could win its first championship. He said something about how they "had to." Oh-so-disappointing when they didn't! Remember their crafty lefty, 38 year-old Jamie Moyer, oldest pitcher to win 20 games for the first time? Hey, whatever happened to that guy?

This set of 33 comics looks a lot like the classic figure drawings from Bob Parker or Robert Laughlin. (Of course, it could also be one of them working officially for Topps.) Vertical folds on the scan show how the comic wrapped around a piece of gum. Single examples measure a couple inches square, but some larger uncut sheets also found their way into collector hands, probably from Topps' own vault. View a melange of comics in the logo of that's set pricing sheet at Dean's Cards (no endorsement implied).

Though Dean's site prices the set at more than $80, individual "commons" cost as little as a quarter elsewhere and you could assemble the whole shebang for about $50 with some searching.

Thanks for checking them out. I updated the post with some product searches if you're looking for some!