Today's guest played in 15 MLB seasons with a handful of teams, but most famously with Chicago, who acquired him at 1949's mid-point from Cincinnati. He looks a trifle old on this card because the Reds waited two seasons after his war service to promote Hank to the majors, including a AAA year with 50 homers. Not one to waste time, Sauer blasted another 35 during his rookie year of 1948. 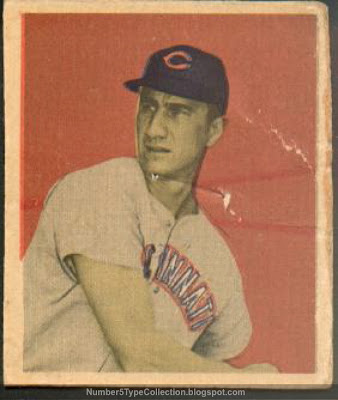 Bowman's 1949 set gets a shrug of the shoulders from many collectors. Sure, it's a multi-series, 240-card issue from a major name, but why so lackluster? Bland backgrounds and mis-aligned color printing (apparent on the #5) dogged the whole set and made many players look hazy or just plain ugly. Cards backs include decent bios, but we're still a few years away from Topps' popularization of the stat grid.

I did learn something new researching the set, courtesy of collector Chris Stufflestreet. Normally, you expect companies to print a complete series, such as #1 through #72, all at once. In 1949, however, Bowman substituted #73 (Billy Cox) for #4 (Jerry Priddy) on their two 36-count printing sheets. This left a bedeviling early-season hole between #3 and #5 that no amount of collector purchases could fill until the next group of cards came along. It also explains why Priddy appears both with and without the "name on front" variation first seen in the second series. Summarily lame from a customer perspective, if relatively innocuous in the lens of history.

Value: 1949 Bowman's tough to finish thanks to its scarce high series. They run $10+ each in low grade, quite the investment for an ugly duckling set. This #5 Sauer cost me only $5 from eBay back in 2003.

Fakes / reprints: Some modern retro sets adopted the 1949 Bowman design, though with a better touch on the color and pose definition. Thanks to 1949's blockier color, it's easy enough to tell the old and the new apart.
Posted by Matthew Glidden