This 200-card issue covers the 16 teams that took the field in 1960. Each squad gets about a dozen players, though the Yankees kick it off with #1-18. (Hence Bob Turley clocking in at #5.) Backs are blank, so they pack demographics, stats, and a color photo into one tight layout. The stat summary is cribbed directly from the previous year's Topps set, but at least they stole from smart people.


American League expansion added the Los Angeles Angels and a new Washington Senators (the "old" version moved to Minnesota and became the Twins) in 1961, which prompted a lot of player movement. That's a problem for a cereal company, which can't just sell everything in April. Several Post cards include a change of teams or transaction note, like "Sold to Washington." See the set checklist for a full list of these variations. (The National League added two teams in 1962, Houston's Colt .45's and New York's Mets.)

Most of these cards came right from boxes, trimmed by the hands of young fans. However, not every card came this way. Post also produced perforated, full-page team sets that you could separate into individual players. Note the edge remnants on Chuck Stobbs, scan courtesy of GFG.com. 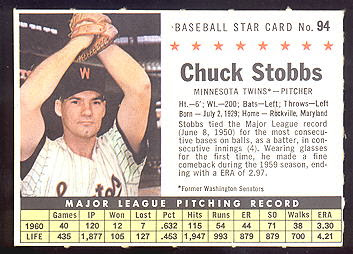 With some guys only available on cereal boxes and others just part of team "sheets," collectors could go nuts trying to fill in the gaps. Refer back to the checklist to see which were BOX (cereal) only and which were COM (company-printed). Some variations exist in only one of those formats, even if you could find the number itself in both. At least players were on the outside of Raisin Bran back in 1961, so kids knew which one to badger their parents for.

Fake / reprints: Haven't seen any in the marketplace, as the original are plentiful enough.
Posted by Matthew Glidden

The expansion teams in 1961 were the Angels and Senators in the American League and the Mets and Colt 45's (later changed to Astros) in the National.