Babe Herman, primarily a power-hitting first sacker and right fielder for the Brooklyn Robins (nee Dodgers), wielded an above-average stick in an offensively charged era, leading to some pretty gaudy numbers. How many players brush .400 twice (.381 in 1929 and .393 in 1930) without a batting crown to show for it? Who today would consider .313 an "off year?" Somewhat unfortunately, Babe's hitting prowess came hand-in-glove with lapses of concentration in the field and on the base paths. Most infamously, he was the batter for Brooklyn's “3 men on third” misplay in 1926. David Hinckley wrote a modern recount for the Daily News in 2003, but I'll summarize this iconic moment.

On August 15, Babe came to bat with loaded bases and a 1-1 tie game. He sent a moon shot to deep right field, whereupon all runners slowed, in case of a fly out, but Herman ran full-speed ahead, seeking extra bases. The ball bounced high off the wall, but pitcher Dazzy Vance couldn’t score from second and retreated to third after a rundown, only to find first-base runner Chick Fewster already there. Moments later, a hard-charging Herman joined them, leading to a tag-everyone double play. Truly classic work from Dem Bums. 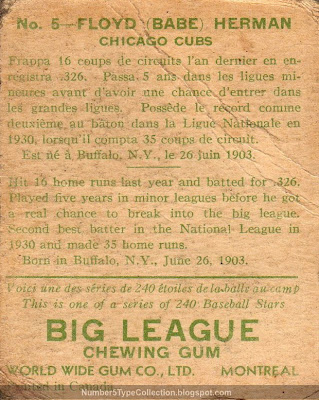 WWG followed this set with another look-alike in 1934 and I profiled its #5, Flint Rhem, in May 2009. These card scans, almost identical to the American issue, show why collectors also call them "Canadian Goudeys." Set size marks the primary difference. Montreal-made backs include the footnote about being "one of a series of 240 Baseball Stars," but wraps up at only #94, Al Spohrer.

Confusingly for collectors, player numbers in both sets match from #1 (Bengough) to #52 (Cohen), but vary thereafter, making it easy to confuse the American and Canadian. If you get your hands on such a card, look for "WORLD WIDE GUM CO, LTD, MONTREAL" on the back. 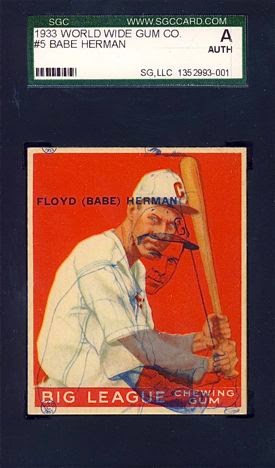 Value: This set's considerably rarer than Goudeys in the marketplace and advanced hobbyists bemoan the completion difficulty of a "master set," which includes all 94 cards with frequent (but not universal) English-only and English/French back variations. This mixed-language Babe Herman cost me about $20 on eBay in 2004, but might be double that today, even in low grade.

Fakes / reprints: Counterfeits exist for at least the biggest names and perhaps the entire set. You can also find "real" reprints of the set aimed at collectors. While scarce, a type card won't set you back enough that it's worth risking a "cheap find" only to end up with a fake.
Posted by Matthew Glidden