Prior to their big 660-card 1981 set, Fleer published a variety of smaller, baseball-themed issues in the 50s, 60s, and 70s. Today's guest comes from a "sequel" to their 1972 Famous Feats, as artist Robert Laughlin reprised his earlier work with a 1980 "Second Series" update of 40 cards. He used a more refined style this time, with deeper backgrounds and less exaggerated features. Some catalogs list the set as "1980 Laughlin Famous Feats" and others attribute it to Fleer. They look very polished in either case, and worthy of collecting just for the art. 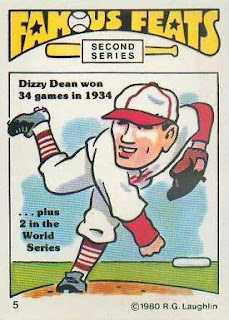 The set's "feats" range from career years (like Dean) to past masters (Connie Mack manages A's for 50 years). My favorite's number 10, Lou Gehrig, shown in the field and half-shadowed. That kind of artistic touch for a classically tragic figure would be almost impossible to communicate on a normal photographic card.

Would HOFer Dizzy Dean be left out in a Hall run by Sabermetricians? His haystack of on-field bravado and later career as baseball broadcaster made "fame" a prominent reason for induction. He was truly marvelous for a handful of seasons--few pitchers won an MVP and finished second twice--but a functional starter for just 6 total, earning 150 career wins. Pedro Martinez, who's at least Dizzy's equal, if less brash, will look to players like Dean for voting comparison.
Posted by Matthew Glidden

I used to LOVE collecting oddball sports cards for my player collections. I never heard of this set, thanks for the info!

Your comment reminded me the post needed a link to the set scans, now linked in the first paragraph and here.

Glad you enjoyed it!