The Corporate King of Deflowering released this 1980 Topps look-a-like to coincide with the nationwide "Pitch, Hit & Run" skills competition. 33 players and an unnumbered checklist comprise the fairly small set, which I assume went out over BK counters and at the event itself. Almost everyone in the set's well-known, so let's link to five guys you might not remember.
The Pitch, Hit & Run challenge remains alive and well, but Aquafina now pays the bills. 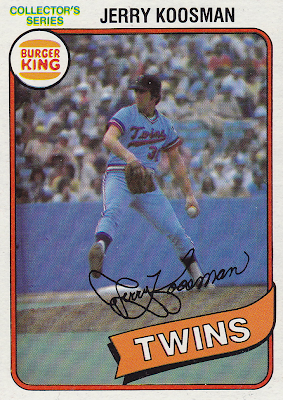 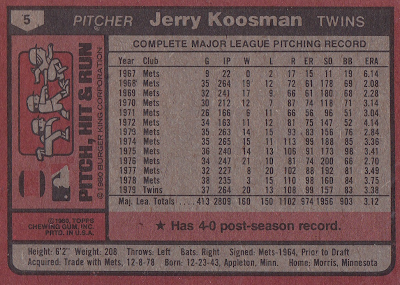 The card back copies most of Topps' design, but swaps out the player highlight cartoon for a competition logo. (Check out CheckOutMyCards.com for an example scan of a certain well-known player.) His 4 post-season wins included the clinching game for 1969's Miracle Mets.

How does a pitcher's environment impact their performance? Note Koosman's similar numbers in 1978 and 1979. Virtually identical games, runs, earned runs, Ks, walks, and less than 1 more inning thrown per start. Even with "just" a 82-80 record, the Twins got him 17 more wins! It's an astounding difference.
Posted by Matthew Glidden

I am also aware of a Nolan Ryan Burger King card in which he's with the Astros and not the Angels, but most all used the same picture as the 1980 topps. Also, the reverse is in red while the 1980 issue is in blue.

He's a portrait Astro in the Burger King set.