If you've seen a lot of cereal cards from the 70s and 80s, the 1973 set sticks out like a sore thumb. C'mon, where's the fake 3D background? Why on earth is it printed on card stock instead of space-age plastic? You might say Kellogg's, sir, but I've sorted them and strewn my floor with them. Mr. Sutton, you're no Kellogg's. 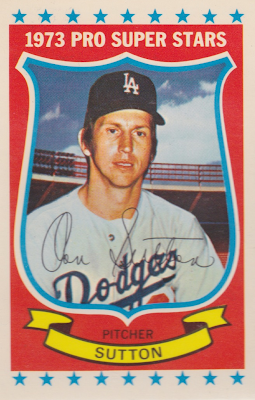 Political japes aside, today's guest did indeed come from specially marked boxes full of sugar-frosted something-or-other. Kellogg's use of "regular" paper and "plain" photographs in 1973 might be unique in their vintage sets, but it also feels comparatively normal, like Mario Mendoza going 1-for-5. I personally like seeing a player clearly and don't know why a cereal company, of all people, went for funky visual effects. At least their 70s commercials stuck to the basics: America, Babe Ruth, and sugar.

Don Sutton turned 23 seasons of consistency into 324 wins and a 1998 Hall of Fame induction, though not without a modicum of sportswriter grumbling. After all, he won 20 games only once and placed no higher than 3rd in Cy Young voting, losing the affection many voters have for dominant performances. Don used dogged determination to cover up any deficiencies in flash, logging 30+ starts per year and winning 15 games as late as age 41. I think that putting up similar numbers to a host of more agreeable enshrinees made the difference--he's tied with Nolan Ryan for 14th in wins and finished between Tom Seaver and Gaylord Perry in Ks. 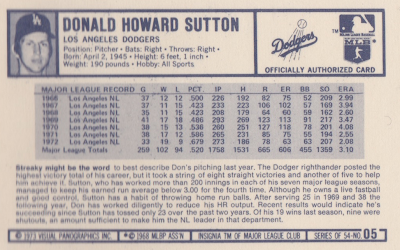 The card back notes a penchant for allowing home runs, something that continued at a relatively high rate throughout Don's career. A 42 year-old Sutton almost allowed more than gopher balls (38) than walks (41) in 1986. He balanced this tendency by tossing several shut-outs per year from 1967 to 1977, topping out at a league-leading 9 in 1972. That year, arguably his best, included a career-low ERA (2.02), 19 wins, a Maddux-like 0.913 WHIP, and the first of 4 All-Star appearances. (Unfortunately, Steve Carlton's astounding 27 wins for a 59-97 Philly team overshadowed other Cy Young candidates.) While he claimed few individual trophies, Sutton remains the all-time Dodger leader in wins, Ks, innings, and shutouts.
Posted by Matthew Glidden