Today's peripatetic guest served for 7 teams in his 14-year career, about half of them in a Cleveland uniform. Shortstop's his position on this coin, but his Wikipedia article noted a problem with fielding ground balls, prompting a move to the outfield. (I did OK with infield grounders, it was the HBP that bothered me enough to prompt a switch--to soccer.) 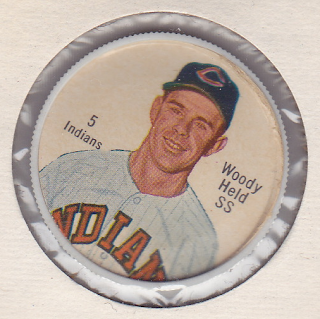 This set of plastic players came individually packaged in boxes of Salada Tea and Junket pudding, so appear in some catalogs as "Salada-Junket coins." Each one features a printed paper insert pressed into a plastic backing. Originally planned for 200 coins, expansion rosters in Houston and New York pushed the total to 221 by year end. These "update" printings also switched some players to new teams and dropped others altogether, creating a few dozen variations and rarities. 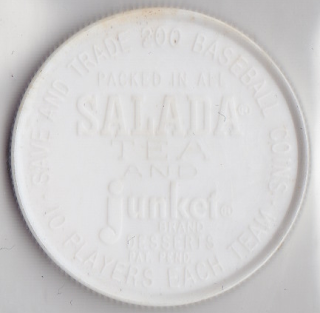 Woody played in Cleveland at the tail end of the Bill Veeck era, which featured adjustable outfield fences, the MLB debuts of Larry Doby and Satchel Paige, and the Indians' first championship. Unfortunately for Held, being after those good times meant several years of second-division finishes. Many 60s fans blame poor performance on a stream of productive players leaving town, including Norm Cash, Minnie Minoso, Rocky Colavito, and Roger Maris. Future home run king Maris is especially significant, as Held came to town as part of that deal. To quote Baseball-Reference.com:


June 15, 1958: Traded by the Kansas City Athletics with Vic Power to the Cleveland Indians for Roger Maris, Dick Tomanek and Preston Ward.

When the time came, Woodie went.


December 1, 1964: Traded by the Cleveland Indians with Bob Chance to the Washington Senators for Chuck Hinton.

Still a power hitter at age 33, Held hit 16 homers and slugged .452 for the Senators in 1965. Unfortunately, his power faded soon after, prompting three more trades before his final release by the White Sox in 1969. In turn, I'll leave you with this Held-attributed quote.

"Don't forget to swing hard, in case you hit the ball."