If you're looking for rubber arms, go no further than today's guest and his mind-bending 678+ innings pitched in 1884. He won 60 games that year (or 59--see his Wikipedia entry for more info) and totaled 309 victories in a fairly brief 12-season career. 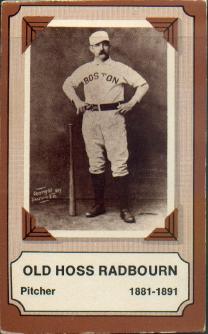 Check out The Fleer Sticker Project's profile of this set for some awesome research on this set's 1975 and 1976 printings, plus a glimpse into artist Bob Laughlin's Inside Pitch card newsletter from the same era. I won't even give away the famous collector it pictures therein! (But remember, awesome.)
Posted by Matthew Glidden

I had a few of those back then. I think I traded for them--I don't remember buying any. But then again, I was 8 years old when these cards came out.

Do you remember your impression of those old player cards? My first 1974 Topps card (traded for in 1979) made me think, "wow, that's OLD." Don't know what I would've made of 19th century players.