While flipping through cards at the 2013 National Sports Collectors Convention, I noticed something for the first time. Something about checklists.


Consider the process of checking off names and numbers from a list. It feels elemental to the image of "collecting," right? Yet fierce competition between Topps and Bowman insured neither would issue one. Every year, both companies withdrew planned cards over contract disputes, so they didn't risk creating a reference list of players, only to have it change at the last minute.

When Topps purchased Bowman player contracts in 1956, it finally freed them to make real checklists, helping collectors fill in every number the company produced. What began as unnumbered ledgers for 1956-57 (see above) moved to the back of team photo cards for 1958-60.


Checklists first became "equal members" in 1961 and all 7 series included 1/3-sized action photos without hinting why that game and play mattered. Were they highlighting players from the checklist itself? Are there patterns in Topps' photo choices? That's what I wondered at the National. 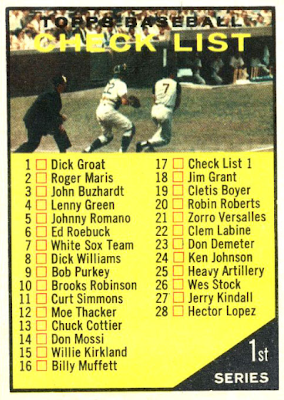 Pittsburgh won the 1960 World Series in fantastic fashion, as Bill Mazeroski's walk-off homer beat the Yankees in game 7. It doesn't surprise me that Topps gave the champs a little extra attention in 1961, including this Pirates action photo on their Series 1 checklist. Upon first noticing it as card #1 on checklist #1, I assumed that's reigning NL MVP Dick Groat, which would be cool. Unfortunately, Mr.  Groat wore #24, so that's not quite what's going on.


Thanks to Baseball-Reference, I learned that's Pirates 1B Dick Stuart (#7) batting and Cubbie Moe Thacker (#22) catching. While Moe appears in Series 1 as card #12, Stuart's not found until #402, killing the "checklist players" correlation. So can we tell what's happening? Assuming their game's from 1960, seeing both Thacker and Stuart together limits this at-bat to one of six Wrigley contests.


Other than revisiting 5 painful Cubs losses, the Series 1 checklist doesn't tell us much. Stuart might've hit a homer to left or grounder to third, who knows.

VERDICT: Unclear alone, but linked to Series 4 below.


That's Chicago playing at home again and Milwaukee visiting. 2B Don Zimmer approaches SS Ernie Banks with the ball, Zim notably shorter (5'9") than Ernie (6'1"). The Wrigley service door behind that runner is in left-center, so that's likely Cubs LF Richie Ashburn walking back to position after throwing to the infield. Banks' indifference to other bases makes me think that guy on second's the only runner, with any others having scored. (His uniform # is just out of view, but doesn't look like a 1.)

Ernie Banks, Don Zimmer, Richie Ashburn in LF, and a caucasian Brave taller than Ernie Banks doubling to left or center limits us to these contests.

Joe Adcock is 6'4", so looms over 5'11" Johnny Logan as clearly taller than Ernie Banks, even leaning to one side. The double's credited as deep LF-CF, so I'm not surprised Hank Aaron in his prime would make it home from first without a throw.

Todd Schultz of Net54 pointed out this could be an easy fly ball where the runner held up, making it quite tough to pick out the situation. Given that all Topps' other checklists use "active" plays, I'm OK with thinking this represents something more dramatic. In this case, the first runs of the game.

VERDICT: Calling it for Joe Adcock's double on July 24.


Next up, the Reds came to town for a midday Wrigley game and caught someone in a rundown. That grandstand divider between CHECK and LIST appears to be just right of the left-center 368 marker, so I searched Chicago-Cincinnati contests for a second-to-third pickle.

Play-by-play recorded Santo's CS as C-3B tag outs instead of rundowns and neither happened with a Reds righty on the mound, who'd be running to back up third base, so I expect a more "developed" play than a straight steal attempt.

Lefty Jim O'Toole pitched during Zimmer's pickle, but that's likely another Red moving to cover, as Cubs had already scored from 2B and 3B during the play. 3B (at left) is #14 Puddin' Head Jones, who just threw to SS Leo Cardenas. If O'Toole backed up home as usual, that'd be 2B Roy McMillan or 1B Gordy Coleman running to third. (The other would've stayed near second to keep batter Glen Hobbie from advancing.)

VERDICT: Looks like Don Zimmer on August 30. (Originally thought it was a Santo pickoff, but Todd Schultz of Net54 prompted me to reinvestigate.)


The Wrigley Field pattern continues, this time with several Cubs arguing an infield call while a Pirate runner waits for resolution. Cubs #11 is 1B Ed Bouchee, #40 is pitcher Glen Hobbie, and #17 is 2B Don Zimmer.

If that's the same game from Topps' Series 1 checklist (it matches both camera position and "softer" photo quality), combined rosters include Moe Thacker, Dick Stuart, Ed Bouchee, Glen Hobbie, and Don Zimmer. That narrows it to Pittsburgh's 11-3 win on June 9, where Cubs starter Hobbie lasted just 3 innings. His nine-out window IDs this photo as Hal Smith's 2nd inning, 2-run double, the only non-walk play when a Pirate ended up at second.

The guy in that umpire's face could be manager Lou Boudreau or 3B Ron Santo, as SS Ernie Banks looks to be just out of sight behind the knot of players. Boudreau might've come out to argue a tag at second or third, without causing enough ruckus to get tossed, since he finished the game. But speaking of ejections... 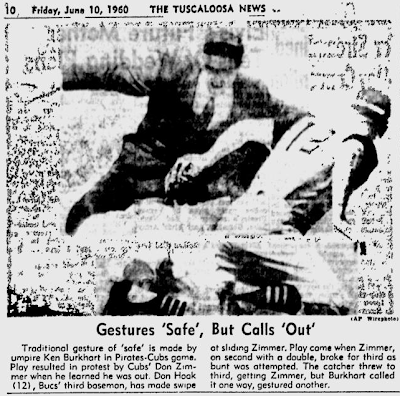 Thanks to Google News archive for this 1960 coverage of Don Zimmer's ejection in the third inning of that same June 9 game. Umpire Ken Burkhart made a combo safe/out call on a close tag play and Zim took exception to the mixed message (and being called out). Chicago's Jerry Kindall took over at 2B for the remainder.

VERDICT: Taken with Series 1, this is June 9.


Ah, we're in Chicago once again and that's Ernie Banks sliding in safely to third as Phillies #4 Ted Lepcio takes the outside throw from left or center. Banks ended up on third plenty of times that year, so several possibilities loom. Did he run first-to-third on a single to center? Triple deep into the ivy? Advance from second on a fly ball?

Fortunately, Ted Lepcio's a utility man and his rare Wrigley Field time offers just one match, the Cubs 5-4 win on August 27. Ernie Banks hustled the winning run out of an infield double, the pictured advance to 3B on a fly out, and Frank Thomas' single to center.

VERDICT: This is Ernie Banks advancing on August 27.


Full disclosure: this Series 6 picture kicked off my research into 1961's checklists. I paused in a long aisle of dealers at the 2013 National convention hall, lifted the card from its 50-cent box, and thought with sincerity:

"Why the heck did Topps put this on cardboard?"

Forget when and where this happened. Nameless dude protecting his head from an outfield throw while the third baseman flaps his arms? That's worth committing to the prime real estate of a checklist's only photo? Horsefeathers! Pshaw and poppycock! Good day to you, sir!

JollyElm at Net54 proposed that, unlike other checklists, this is Comiskey Park, not Wrigley Field, and that's White Sox #4 Gene Freese at 3B. I agree, given his bright white home uniform and road grays on the batting team (NYY or DET). You've also got a home plate umpire making the call at third, so something about the play pulled the 3B ump out of frame. No obvious shadows mean this could be an overcast day, but warm enough for no player undershirts. I checked every Yankees and Tigers game at Comiskey, with two gut-feeling matches.

VERDICT: Feel better about play on August 9. Home plate ump would be Red Flaherty and third base coach is Frankie Crosetti.


More horsehide fumbling at Wrigley, as Milwaukee's shortstop races to recover a throw while #13 Chuck Cottier looks toward home or first. An umpire without his topcoat and jerseys without undershirts imply a hot afternoon. Everyone's focused around second base, so I looked for an attempted 2B-to-SS force or double play that went awry, with two decent matches.

Cottier appears to be checking home plate as Johnny Logan kicks the ball, giving an edge to the August 31 play, where Richie Ashburn scored the game's first run.

FINAL TALLY: Of the 7 checklists, we have 1 stadium, 5 positive play IDs, 2 tentative play IDs, and 1 arm-flapping third baseman. Some plays rest on assumptions, but what's amateur research without enthusiastic pursuit of continuity?

Thanks for following the photo ID work and chip in if you see a detail I missed!

UPDATE: Al Richter of Net54 noted variations for all 7 checklists, if you're after a master set.

Great post. You're definitely the Sherlock Holmes of cardboard.

Thanks, it was fun to pull together!

Good work, Spike. I was looking at one of these and wondered exactly the same thing, so I Googled it! Glad to see your post was one of the top results. So, did you turn the cards OVER? There's a little sumpn on the back too. Good luck.

Thanks Aaron, I hope that's the checklist variations...if there's more to investigate, I'll have to set aside another bunch of Google archive search time. :-)

This is such great information and research! I was looking for a source that would confirm it was Don Zimmer on card #98. Can't believe he is on two other checklists as well! Now to track down all the variations for my Zimmer collection.

FYI: Checklist you have as card #272 is actually #273. You're so detailed thought you would want to fix it.

Thanks Brad, #273 correction made!