Thanks for nominating great variations and permutations in my final 2013 National Wrap-Up! I'll run down each choice, add my own favorite to the end, and pick a winner for 1934 World Wide Gum #5.

Sean Langon started with a card of significance to many, the 1972 Topps & O-Pee-Chee Gil Hodges.


GCRL compared the Topps/OPC versions on his blog, but the short story is OPC must've edited their set later, so added a tag to let young collectors know why Hodges wasn't on the field anymore.

My dad's a big fan of the Dodgers and loved Hodges and Brooklyn's other Boys of Summer. Gil passed away the day before I was born, making it easy to link childhood stories to baseball and vice-versa.


Radicards discussed the collecting environment that led people to buy pack after pack, hoping to score a well-known error that might've been intentional. The chase for errors and rookies eventually pushed companies to create parallels and other subsets for every issue, rather than depend on collectors themselves to find and hype company "mistakes." However Murphy's card happened, it's a stepping stone to today's collecting environment.

Some cards grow to outshine a player's own career, even guys with Hall of Fame last names. Greg Zakwin of Plaschke, Thy Sweater is Argyle nominated the infamous half of the only brother team to play for their manager father, Cal, Sr: Billy Ripken.


Wikipedia quotes Fleer as creating "at least ten variations" to deal with Billy's batting practice bat expletive. See the "Versions" link at BillRipken.com for a full rundown of far more than I expected to see. At one point, obscure versions booked $100+ and all permutations continue to sell for well above Cal's own card from the same set.

4. Player I have Player I want!

Fellow OBC vintage collector Jason Chistopherson nominated his take on the "Minnie Minoso to Manny Mota" card I recently upgraded to a plain old Minoso. Let's say you have a 1953 George Crowe, but he leaves after a few years and now Felix Mantilla plays for the Braves. There's an easy solution!


Sure am glad I finally found that Felix Mantilla card, yessir.

Hackenbush of Can't Have Too Many Cards noted how Topps created accidental variations by putting the wrong photo on the right card.


That's Santo's large photo, Landrum on the inset, and I bet Cubs collectors dream of finding a double-autograph version. (Landrum passed away in 2003 and Santo in 2010, so there's a good shot of at least one kicking around.)

Ron's normal card #252 is Santo through and through. 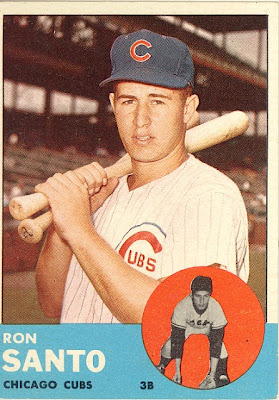 Night Owl (of the eponymous card blog) called out the first variation I remember as a young collector, Topps' errant forecast of an off-season trade from Texas to Toronto.


Bronx Banter delved into the insider rumors that fed Topps' mistake, complete with recollection from the seminal Sy Berger. This card doubly stood out to me when Bump's father Maury Wills took over my Mariners for the 1980 season. Despite Maury's "unmitigated disaster" as the man in charge, having both father and son active in the same AL division gave games against Texas some extra sizzle.

At one point, I sought to build a "master version" of my favorite set, 1956 Topps, an issue rife with multiple backs, dated-or-undated team cards, and minor print layout variations. The primary focus is on card stock for #1-180, which came in white or grey. Buying both backs for the type collection meant paying twice for this guy.


Here're the other HOF and star variations from that series that you need (at least) two of.

I eventually ditched the master set goal because DAMN that's a lot of card spending. It's an admirable long-term goal to pursue and includes terrific variations along the way, but remains an expensive road to travel.

GIVEAWAY WINNER: I should probably send an obscure 1930s Canadian card to everyone as reward for reading this far. But since I have just one spare Flint Rhem, let's roll a virtual six-sided die. 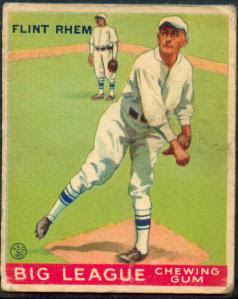 RANDOM.ORG GENERATED 5 AS THE NUMBER, NOT A JOKE.

Congrats to Hackenbush, who nets the Flint Rhem with that 1963 Santo/Landrum nomination! Will contact him for a current address and thanks to everyone else for entering, I enjoyed poking around the history of those variations.
Posted by Matthew Glidden