Some details of this oddball set remain a mystery outside of its Exhibits-like print style. It's 3"x5", blank-backed, and printed on thick stock, so not practical for actual hands of bridge. The 82-card checklist's officially tagged as "1962 Pittsburgh," with expert opinion placing distribution about there and then. (Keyman Collectibles keeps a checklist and more set info.)


5 of Hearts isn't a proper #5 for my type set, but offers a fun excuse to mention excellent third-sacker Ken Boyer. One of the best offensive and defensive players of the late 50s and 60s, our guest's #14 deservedly hangs on the Busch Stadium wall. (#17 is none other than recent comparative Dizzy Dean.)

Over the years, I've heard a lot of dramatic Key Boyer stories from Midwestern friends. (A major highlight is Ken's take-the-lead grand slam against New York in 1964's World Series.) St. Louis residents remembered him in print as recently as June 21, 2009. 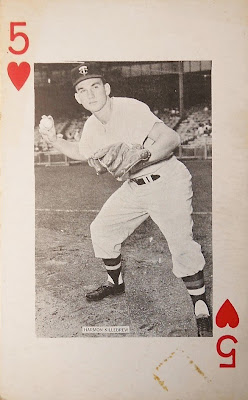 Hall of Famer Harmon Killebrew also shows up as five of hearts, one example of the set's multiple players per number and suit.

These Exhibits made me think of other "baseball playing card" designs from over the years. Here's a shotgun profile of the genre.

Those barely scratch the surface, as you could build a sizeable collection just from playing card sets or playable ones like 1968 Topps Game.

Value: Boyer cost me $10 a few years ago. eBay sellers of other Pittsburgh Exhibits ask from $20-50, depending on the player.

Fakes / reprints: Some Exhibits releases stretched across decades (40s-60s) and went through reprints in the 1980s. It's not clear if this 1962 issue did the same, but it's possible.
Posted by Matthew Glidden