Over the years, I've come to enjoy baseball's anachronisms, especially as shown on vintage cards. Every modern batter wears a helmet. Fewer today choke up on the bat. Pitchers almost never leg kick like Warren Spahn. And are there any catchers left who dare to don a yellow chest protector? 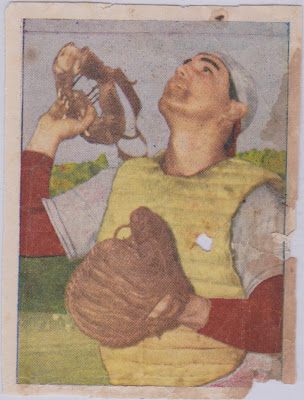 Salvador Hernandez isn't your typical MLB catcher, though, he's a Cuban Beisbol Hall of Famer (elected 1997) who played and coached for Cuban, American, and Mexican teams, including 1947-48 outlaw league champions Leones de la Habana (Havana Lions), uniform below. The above picture's hand-tinted from a black-and-white photo, but I assume his protector is real-life yellow, as sun-soaked colors abound throughout the region.


Salvador also played two WWII-era seasons with the Cubs, hit an even .250 over 90 games, and paired with pitcher Hi Bithorn to form the majors leagues' first all-Latino battery (more at B-R). Unfortunately, the war also consumed most of America's paper, so no domestic-made sets meant no collectible cards of Hernandez in MLB uniform. 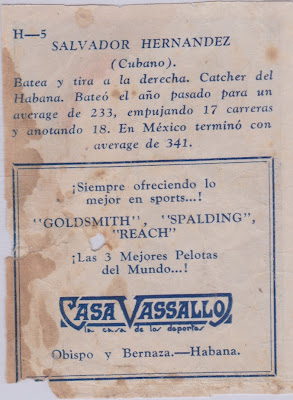 "H-5" means Havana #5, because the checklist keeps each team separate. As with other 1940s Caribbean issues, this card's printed on thin paper and its publisher (Cuba's Sports Almanac) expected collectors to mount all 160 players in a provided album like stamps. Salvador's uneven edges betray these came from larger, 4-card sheets, several of which auctioned for $950 in July 2013.

UPDATE: The AP wrote about Salvador's first game with the Cubs, with details of the injuries that pushed him from Chicago's #3 backstop to #1.

Value: I bought Salvador for $15 from CubaCollectibles.com. Negro League collectors drive up prices for Hall of Famers like Martin Dihigo, but type singles remain affordable.