Part of the magic of big card shows like this year's National Sports Collectors Convention is knowing that unexpected treasures abound. Despite becoming a quite difficult wantlist to hit, friends and dealers added three cards to the type collection and I only had to pay $1 for all of 'em!

It's been too long since we've done a giveaway, so look for your chance to win a rare vintage #5 after the roll call. 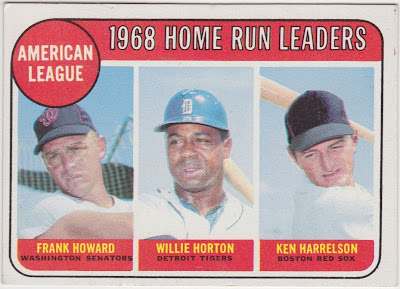 I recently sold my 1969 baseball set (*cough* eBay ID late_innings *cough*), which meant the #5 needed replacing. This EX version starring three fan favorites (because who doesn't dig the long ball?) popped up in a $1 box and fit the bill nicely. 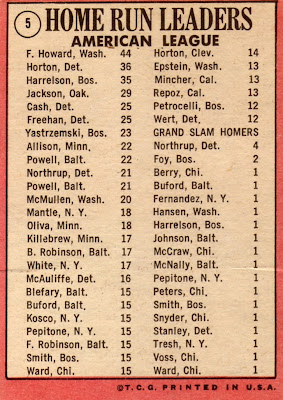 Wow, there was a big drop from the top 3! Even 4th place Reggie's 29 homers trailed Frank Howard by 15, a huge gap in the pitching-dominant 1960s.

Jim Northrup's grand slams include two in one game (June 24 box score), when he also became the second player to hit them in consecutive at-bats. Jim hit another in game 6 of the World Series, making 5 for 1968, regular and post-season combined. 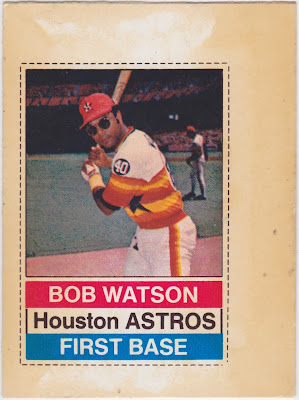 The uniform, the sunglasses, the Astroturf. Bob Watson is still cooler than school.

Hostess put together a nice run of 1970s sets attached to snack boxes, including this red-white-blue design on America's bicentennial. This single-player panel supported a pair of Twinkie cakes that left telltale staining and still emits a faint chemical scent. Mmm, preservatives! 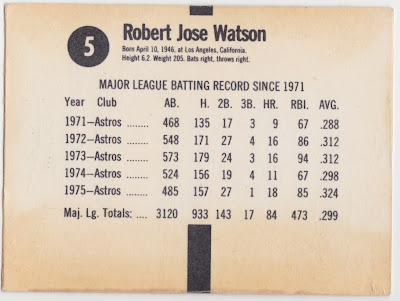 Some collectors try to build both Hostess (printed on snack boxes) and Twinkie (one per panel) sets. If you find them trimmed down to card size, those vertical black bars delineate Twinkies from "regular" Hostess cards.

My longtime collecting friend Steve (fellow member of OBC) gave me both this and the next #5, so it cost $0, my favorite price! 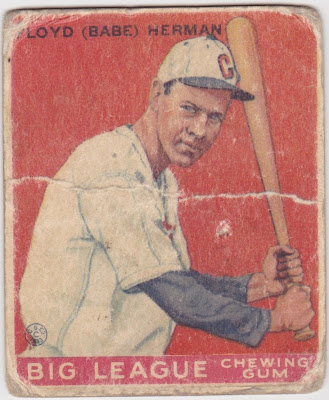 Slugger Babe Herman played the key role in Brooklyn's infamous "three men on third," as a head-down runner too committed to advancing to let something like a base coach tell him what to do.

While a great card to have, this #5 is special for what's on the back. 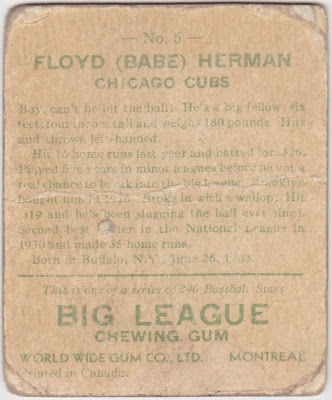 Prior to this year, I'd owned several Canadian-made World Wide Gum cards, but all with bilingual English-French back text. Steve gave me this rare permutation on an already scarce set, the "English-only" back that fills a previously-unknown slot in the type collection, which now includes both back variations. A+! 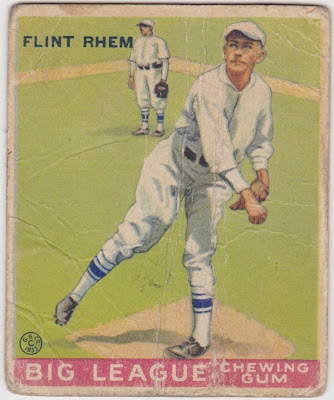 Drunk with the possibilities of capturing both World Wide Gum back variations at this year's National, I also bought this 1934 #5 of Flint Rhem, gambling it was the one I didn't already own. Wrong for me, as it's a duplicate of the English-French back text, but good for you as it's now free to give away. 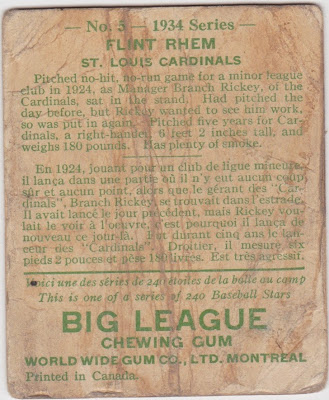 Even in low-grade, these World Wide Gum cards don't pop up often, and you'll learn a little French on the side. (I enjoy that "has plenty of smoke" translates to "est très agressif.")

HOW TO ENTER: Add a comment naming your favorite baseball card variation from any player, team, or year. To collectors, that usually means an error that the card company later corrected, but surprise me if "variation" says something else to you. (OBC members, for example, might call a crossed-out player--see my National upgrades post for examples--a "new name variation." :-)

I'm not sure if this quite counts as a "variation" since it's technically two separate issues, but my favorite variation has to be the 1972 Topps / O-Pee-Chee card of Mets manager Gil Hodges. As most fans of baseball history know, Gil unfortunately suffered a fatal heart attack during spring training in 1972. The 1972 O-Pee-Chee card was issued with just a small, understated note on the front reading "Deceased, April 2, 1972". I just thought it was a nice was to acknowledge the passing of one of the greats of the game.

I still remember my heart skipping beats every time I pulled a Murphy from a pack and hoping it would be the rev neg (it never was).

I picked one up a couple decades later, was quite pleased with myself, then read "Card Sharks" and was a little less excited.

It's not a shocking or original answer but the Billy Ripken "F Face" is still my all-time favorite error/variation.

Not the black box or any other version, just the straight-up F Face.

Especially since that homer of a "baseball analyst" comes off as one whenever he tries to talk baseball.

As a fellow OBCer, I'm happy to report a brand new variation I just received in the mail. It was a '53 Topps card of a Brave, but the name doesn't matter because it was completely crossed out and the name "Felix Mantilla" was given in its place. I believe it is a true 1 of 1 and I expect someday to have it graded as such with OBC's Guru Grading Service.

Mine would be 1963 Topps #113, Ron Santo's picture on Don Landrum's card. You can disqualify me if it's not a variation (probably isn't). BTW I have a couple of your former cards in near future posts. You found them a good home.

Got to be Bump Wills Rangers-Bump Wills Jays from 1979 Topps. It took me 2 decades to find the Blue Jays version, and I nearly fell over in some guy's driveway when I saw it at a garage sale. They both be mine now.