Given time, most baseball fans can rattle off all 30 MLB teams by city and name, and probably some former teams besides, such as the Seattle Pilots or Montreal Expos. Minor league teams, on the other hand, prove much more challenging to name, given how much they move around, often changing towns or names multiple times in less than a decade. Smaller fan bases leave most squads sensitive to changing fan interest and only the best-run teams hang around long enough to become known outside their geographic region. 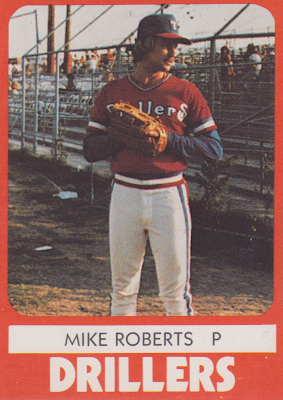 Today's card brought the shifting sands of minor league existence to mind when I looked up Tulsa and the history of its AA team, the Drillers, who joined the Texas League the same year MLB added Seattle's Mariners and Toronto's Blue Jays.

The Drillers played briefly in Lafayette prior to moving to Tulsa, but are one of just two squads to maintain their Texas League town and name in the 35 years since.

If you've heard "Texas Leaguer" in a baseball context, by the way, that's a weak fly ball (lower than a pop up) that drops between an infielder and an outfielder (also "flare" or "blooper"). According to Wikipedia, the term originated when Ollie Pickering, a popular Texas League player, made his major league debut and proceeded to run off a string of seven straight bloop hits, to which the game announcers stated, "Well, there goes Pickering with another one of those Texas Leaguers." 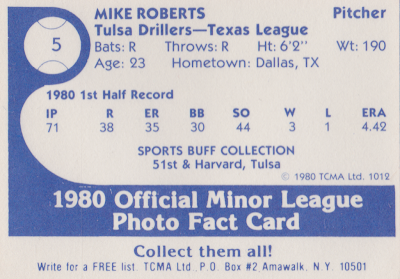 Hey, is SPORTS BUFF COLLECTION an ad for Tulsa's local sports card shop? It's tempting to think so, but the only Internet reference I found refers to the business as either a "retail sports store" or "scientific and technological services." Maybe they sold cards and maybe they sold computers. Any readers from the Midwest know more about this store?

Value: Found this on Beckett Marketplace for $2.