Meet the Eddie Gaedel of Yogi Berras, a baseball card so small that I'm re-evaluating my line between "card" and "chit." 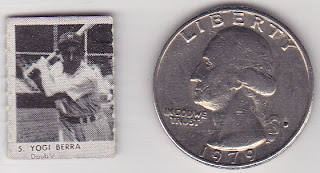 
Vending machines sold this set pretty much like they sell things today, as part of a large assortment of stuff kids will part with pennies or nickels to own. Comics and cartoon characters feature heavily in the same series, though came on separate strips, never mingling with baseball. Full sets number from #1 to #120 but omit #100, for 119 total players. (The publisher probably left out one card to keep kids buying strips in a vain search for completion.)

Jefferson Burdick's American Card Catalog prefixed these R346 and R423 sets with "R" for "pre-1951 gum cards" and added a number to further organize them. Based on the catalog's first few hundred entries, Burdick started with an alphabetic system but abandoned it, likely because new set discoveries broke up his existing records. With no company name to ID them, collectors know these two baseball sets best by his catalog numbers.

Value: A collector friend from OldBaseball.com sent me this HOF oddball gratis; thanks Mike! Non-HOF singles cost a few dollars in low grade and Berra would go for $15-20.

Fakes / reprints: Thanks to Beckett, we know that fakes exist for HOFers in this set and possibly for the entire run. (Modern text printing and thicker paper look like the main counterfeit clues; see their notice for more.)
Posted by Matthew Glidden